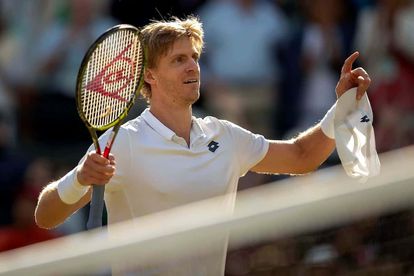 Kevin Anderson stands on the precipice of history, bidding to become the first South African to win Wimbledon when he faces Novak Djokovic on Sunday.

The six-foot, eight-inch powerhouse has enjoyed a fairytale run to the final this year. He captured the imagination with his shock-victory over Roger Federer in the quarter-finals, before emerging victorious from the second-longest match ever played on Friday.

The Serb certainly has the historical advantage over our Kev, winning five of their six clashes. Anderson’s sole victory came during their first encounter back in 2008. Since then, Djokovic has chalked up five victories in a row:

Anderson got himself into a terrific position during their fourth-round match three years ago. The big-serving Saffa stormed his way into a two-set lead but was pegged back by the indomitable Djokovic.

He rallied back to take the third set 6-1, before edging out Anderson in the last two sets to seal a dramatic victory. It really was a case of so near, yet so far for Anderson.

After his marathon performance on Friday, there were fears that Anderson could be on course for burnout before Sunday’s showdown. However, Djokovic saw his titanic semi with Rafa Nadal go on for more than five hours.

It was only on Saturday afternoon that Djokovic sealed the win. Both players are going to have to draw from their almighty reserves one last time if they want to take the SW17 title.

Wait, what? Durban pupil ‘pays’ taxi driver with her G-string