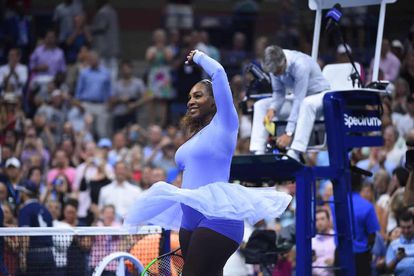 Serena Williams will play Japan’s Naomi Osaka in the US Open final on Saturday. Osaka spoiled an all-American final by beating Madison Keys in the second semi-final.

Beating Osaka, who will be the clear underdog on Saturday, Serena Williams would improve her own Grand Slam record to 24 Grand Slam titles, opening a gap on second-placed Steffi Graf who won 22 major titles during her career.

Winning her first title as a mom will be of special significance to Williams, too.

US Open: Williams vs Osaka by the numbers

Williams and Osaka will both be chasing history at 21:00 SAST on Saturday. The 36-year-old US superstar, whose 23 Grand Slam titles are an Open Era record, can match Australian Margaret Court’s all-time record of 24 with a record-setting seventh US Open title.

Osaka, 20, is the first Japanese woman in a Grand Slam final and can become the first player from her country to lift a major trophy.

Included in those wins is all the other wins from the US Open. So, just to bring the point home, here you go.

At the age of 17 Williams became the first African-American woman since Althea Gibson in 1958 to capture a Grand Slam singles championship.

Serena battled back from 3-5 down in the third set to beat Kim Clijsters in the fourth round, before defeating top-ranked Hingis in the final. Serena also partnered with her sister Venus to win the doubles title, becoming the fifth woman in the Open era to sweep singles and doubles titles at the Open.

The sisters squared off in their third consecutive major final of the season, with Serena prevailing over the two-time defending champion. Serena, who won 32 consecutive sets in Grand Slam competition in 2002, became the first woman to win three straight majors in the same season since German Steffi Graf in 1996.

Williams battled her way to to a first US Open title in six years and regained the world number one ranking she had last held five years earlier with a gritty victory over Jankovic.

The Serbian held four set points in the second set, but Williams won 10 of the last 16 points for a “magical” ninth major title.

Williams seized her fourth US Open crown after Azarenka served for the match and led 5-3 in the third set.

It was the first time since 1995 that the final went to three sets and the victory made Williams the third woman in history to win Wimbledon, the Olympics, and the US Open in the same season after Steffi Graf and her sister Venus.

Williams collected $3.6 million, including a $1 million bonus for producing the best results during the North American hardcourt “US Open Series” tournaments and became the first woman to top $50 million in career earnings.

Williams didn’t drop a set in roaring to a third straight US Open title, and didn’t lose more than three games in any set.

Her 18th Grand Slam singles title tied the number won by Martina Navratilova and Chris Evert, and her sixth US Open title tied the record held by Evert.