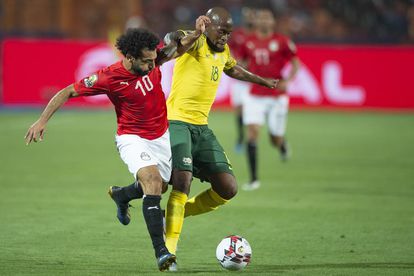 CAIRO, EGYPT – JULY 06: Mohamed Salah of Egypt and Sifiso Hlanti of South Africa during the 2019 Africa Cup of Nations Round of 16 match between Egypt and South Africa at Cairo International Stadium on July 6, 2019 in Cairo, Egypt. (Photo by Visionhaus)

CAIRO, EGYPT – JULY 06: Mohamed Salah of Egypt and Sifiso Hlanti of South Africa during the 2019 Africa Cup of Nations Round of 16 match between Egypt and South Africa at Cairo International Stadium on July 6, 2019 in Cairo, Egypt. (Photo by Visionhaus)

A club from the United States of America, presumably in action in the Major Soccer League have tabled a R4-million bid for Wits defender Sifiso Hlanti.

Hlanti’s showings at the 2019 Africa Cup of Nations reportedly attracted interest from multiple clubs from abroad including Europe and the US.

Wits are reported to have rejected the fat offer from the US for the 29-year-old Bafana Bafana stalwart.

“There have been offers for Sifiso Hlanti and it’s just that Wits has been reluctant to part ways with him,” a source close to the club told Soccer Laduma this week.

“The player had been made a good offer from overseas during the recent transfer window, but Wits was reluctant to release him. It’s a club from USA. An offer of around R4 million was made for the player’s services but it was rejected,

Salah in the Bafana man’s pocket

It was Hlanti’s efforts against Egypt that seem to have attracted attention as the fullback was able to keep Mo Salah from causing trouble. As a left fullback, Hlanti covered the Egyptian right flank from which Salah causes problems in both national team colours and for Liverpool. He kept the African Footballer of the year for 2018 quiet which helped Bafana shut out Egypt and progress courtesy of Thembinkosi Lorch’s goal.

Bafana Bafana bowed out at the quarterfinal stage of the tournament after suffering a 2-1 loss to Nigeria.

Hlanti also sustained an injury at the tournament which has prevented him from featuring for Wits in the Cleverboys 2019/2020 season.

Originally from Durban in KwaZulu-Natal the defender made his professional debut for Lamontville Golden Arrows in 2010, after a move to Chippa United at the beginning of the 2012 season, Hlanti returned to KZN with NFD side Thanda Royal Zulu.

Thanda would hold onto him for just one season before selling the fullback to Amazulu from where he would be loaned to Wits in January 2016. The move was made permanent at the end of the 2015/16 season.

Wits hold on to their man

Hlanti has made over 100 appearances for Wits across all competitions since his initial loan spell and it was while with Gavin Hunt’s team that he was first picked to play for Bafana Bafana. He has made 11 international appearances since his debut in March 2016.

Wits currently occupy second spot on the Premier Soccer League table and are understandably eager to hold onto a player who has been among their best over the past three seasons.