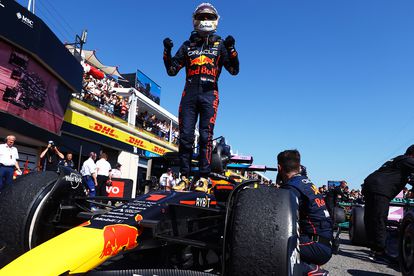 Max Verstappen has extended his advantage in this year’s title race with victory ahead of Lewis Hamilton in Sunday’s French Grand Prix. Photo: Twitter @redbullracing

Max Verstappen has extended his advantage in this year’s title race with victory ahead of Lewis Hamilton in Sunday’s French Grand Prix. Photo: Twitter @redbullracing

World champion Max Verstappen took full advantage of Charles Leclerc crashing out to extend his advantage in this year’s title race with victory ahead of Lewis Hamilton in Sunday’s French Grand Prix.

The 24-year-old Dutchman drove with flawless control in the searing heat to guide his Red Bull home 10.587 seconds ahead of Mercedes’ Hamilton, in his 300th race, with George Russell, in the second Mercedes, beating Sergio Perez in the other Red Bull, for third.

It was Verstappen’s seventh win this season and the 27th of his career and a blow to Leclerc’s challenge in the opening race of the second half of the season.

After 12 of the 22 races, Verstappen leads Leclerc by 63 points in the drivers’ standings.

“We had good pace, but it was hard to follow here with the tyres overheating so we stayed calm,” said Verstappen.

“You never know how it is going to go… It was unlucky for Charles and I’m glad he is ok.”

Perez finished fourth ahead of a rampant Carlos Sainz, who drove from the back of the grid to finish fifth for Ferrari ahead of Fernando Alonso of Alpine and McLaren’s Lando Norris.

Esteban Ocon was eighth in the second Alpine ahead of Daniel Ricciardo of McLaren and Lance Stroll of Aston Martin.

Hamilton was delighted to be second.

“It was a tough race as my drinks bottle didn’t work so it was a great result for us, especially considering we’re so far off the pace,” he said.

“Great reliability from the team and George did an amazing job.”

On an afternoon of searing heat, with a track temperature of 52 degrees and the air 34 at the start, Leclerc made a clean start to lead into the first corner ahead of Verstappen, with Hamilton leaping clear of Perez into third.

Leclerc led by a second after the opening lap, which saw Yuki Tsunoda spin and recover while Sainz, from the back of the grid, began his charge.

Verstappen’s superior straight-line speed powered him close behind Leclerc’s Ferrari at the end of the Mistral Straight, but the leader held firm, his car squirming for grip in the heat.

Having resisted Verstappen’s early attacks, Leclerc held a lead of nine-tenths by lap 13.

Sainz, praised for his progress by Ferrari, reached 10th on lap 14.

At the front Leclerc increased his pace to draw 1.7 seconds clear by lap 15, when the track temperature was recorded at 55 degrees.

“We are planning Plan B,” Ferrari told Leclerc, refocusing on tyre wear and strategy.

Verstappen came in on lap 17 for a stop in 2.4 seconds, rejoining seventh. As he came back, Ferrari warned Leclerc his tyres were over-heating, but he held a 10-second lead ahead of Hamilton with Perez third, three seconds adrift.

Verstappen passed Norris swiftly for sixth, but Leclerc stayed out and then, on lap 18 crashed at Le Beausset, going heavily into the tyre barrier.

He climbed out, apparently unhurt despite the estimated 175km/h impact.

The distressed Leclerc shouted that he had a throttle problem. It was his third exit from the lead this season, just as he looked capable of scoring Ferrari’s third consecutive victory.

A safety car was deployed, Hamilton pitted and Verstappen took the lead.

Leclerc emerged later to admit the crash had been his fault.

“It was a mistake, my mistake,” he said.

“I was pushing too much and I lost the rear.”

Verstappen made a smooth restart to lead from Hamilton and Perez as Sainz climbed to fifth. The Spaniard was then handed a five-second penalty for an unsafe release from his pit stop.

By lap 34, Vertappen led Hamilton by 6.499 seconds with Perez third, 1.475 adrift, but blisters emerging on various tyres, notably Sainz’s front right after he had passed Russell for fourth.

With 15 laps remaining, it posed problems for the Italian team’s pit wall crew and others as the swirling wind increased.

Frustrated in fourth, Sainz asked Ferrari for fresh tyres who told him to go for Plan D, then to stay out and finally, in mid-overtaking of Perez to pit.

“Not now,” shouted the Spaniard who muscled through to third and then, on lap 43, pitted for tyres and to serve his penalty.

It seemed Ferrari, bafflingly, had thrown away a solid chance of third as Sainz rejoined ninth, while Russell and Perez battled for the final podium spot.

French Grand Prix results on Sunday, the 12th race in the 2022 Formula One world championship: