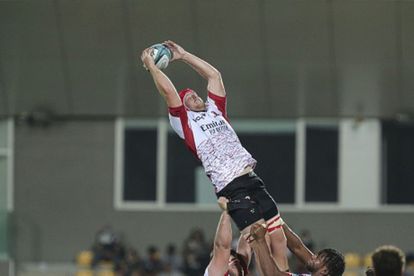 Francke Horn (Lions) gets the ball in touch during the United Rugby Championship on September 24, 2021 at the Sergio Lanfranchi stadium in Parma, Italy Photo: Massimiliano Carnabuci/LiveMedia/NurPhoto via Getty Images)

Francke Horn (Lions) gets the ball in touch during the United Rugby Championship on September 24, 2021 at the Sergio Lanfranchi stadium in Parma, Italy Photo: Massimiliano Carnabuci/LiveMedia/NurPhoto via Getty Images)

The Lions face Ulster in Belfast on Friday night looking for a second win in the United Rugby Championship.

Ulster have netted a maximum return of 15 points from three matches and aim to keep their perfect record intact.

The Lions were narrowly beaten by Glasgow last time out and have added Fred Zeilinga to their touring squad this week after Jordan Hendrikse, Eddie Fouche and Pieter Jansen van Vuren all returned to South Africa early with injuries.

Ulster have won their last four matches in total since losing a Rainbow Cup fixture to Leinster at the RDS Arena in May.

The Kingspan outfit have played nine previous matches against South African opponents in the championship, winning seven, drawing one and losing another.

The Lions, meanwhile, have won only two matches across the Rainbow Cup and URC and endured a dismal Currie Cup.

There is a sense that the Lions are an improving side but Ulster present a massive obstacle.

“We felt our performance against Glasgow Warriors last week was a much better one,” said Lions coach Ivan van Rooyen.

“There were quite a few aspects we felt were very good and that’s the kind of momentum we want to take into the Ulster game.

“This is the final game of our four-week tour so naturally we want to end on a high.”

Ulster’s Australian lock Sam Carter is among the few in his team with experience of playing the Lions.

“I’m glad we are playing them at home and not Jo’burg because I have played them a few times there.

“It is going to be a tough contest with their forward play, they have a big, tough physical pack, they have a great kicking game and pace out wide so it is something we are going to have to look at through the week and deliver on Friday.

“The Lions are all based around the set-piece, they pride themselves on the set-piece, lineout maul, scrum, so if we go toe-to-toe and match them with the physicality there that will go a long way to winning that contest.”