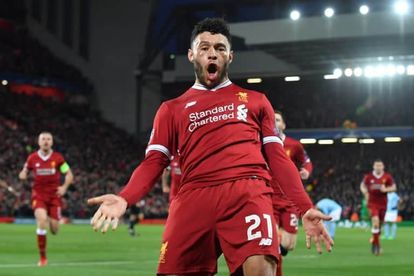 The all-Premier League clash promised much – and Jurgen Klopp’s side didn’t disappoint.

It was a victory for heavy metal football as the Reds deafened their EPL-leading opponents.

Pep Guardiola and Co didn’t know what had hit them.

That man Mohamed Salah put Liverpool ahead in the blink of an eye.

He first burst down the right channel and found Roberto Firmino, who squared the rebound from his own shot back into the path of the Egyptian.

He wasn’t going to miss in a month of Sundays from six yards.

Leroy Sane was immediately afforded an alarming amount of freedom to surge towards a defence that parted like the red-shirted sea.

He scudded wide to the right of goal, with David Silva yelling for a pass to his left.

And they paid a hefty price thanks to Alex Oxlade-Chamberlain.

The ex-Arsenal man took control in the centre and whiz-banged his shot inside the left-hand post in front of the Kop.

And Sadio Mane had them three to the good within half an hour when he nodded Salah’s cross past Ederson.

The sight of Salah walking off with a probable groin injury dampened the mood ever so slightly after half time.

But the sight of no away goals on the Anfield scoreboard more than made up for that on yet another famous night for the five-time European champions.

Barcelona have one foot in the Champions League semi-finals after battering Roma at the Camp Nou.

Luis Suarez thought he’d put Barca ahead early on, only to be denied by an offside flag.

Ivan Rakitic then curled a strike against the post before Suarez whacked the rebound over.

But the hosts were ahead on 38 minutes when Daniele de Rossi put through his own net as Andres Iniesta tried to pick out Lionel Messi.

Roma almost had a penalty soon after when Samuel Umtiti fouled Lorenzo Pellegrini right on the edge of the box.

Free kick, said the ref, with Pellegrini smacking it straight into the wall.

Own goal number two came shortly after the break when Umtiti’s shot came back off the post and in off the hapless Kostas Manolas.

The Serie A leaders even scored one of their own on the hour mark.

Another Suarez effort was well saved by Alisson Becker, who nevertheless couldn’t prevent Gerard Pique tapping in the rebound from close range.

Edin Dzeko pulled his side back into the tie when he found a way past Marc-Andre ter Stegen with ten minutes to go on the night.

But Suarez finally had his goal on 87 minutes.

The Uruguayan scored in Europe for the first time in over a year when he belted in from 14 yards out to leave the Italians with it all to do in the second leg.