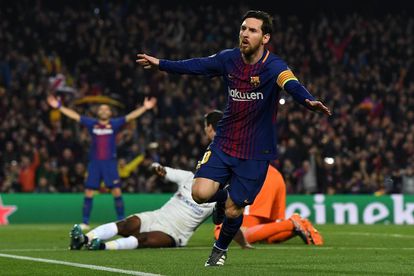 BARCELONA, SPAIN – MARCH 14: Lionel Messi of Barcelona celebrates as he scores their third goal during the UEFA Champions League Round of 16 Second Leg match FC Barcelona and Chelsea FC at Camp Nou on March 14, 2018 in Barcelona, Spain. (Photo by David Ramos/Getty Images)

BARCELONA, SPAIN – MARCH 14: Lionel Messi of Barcelona celebrates as he scores their third goal during the UEFA Champions League Round of 16 Second Leg match FC Barcelona and Chelsea FC at Camp Nou on March 14, 2018 in Barcelona, Spain. (Photo by David Ramos/Getty Images)

Barcelona were far too strong for Chelsea in their Champions League last 16 second leg at the Camp Nou.

Lionel Messi led the way as the La Liga leaders dispensed with Antonio Conte’s side.

It means the Blues have followed Manchester United in being the second English Premier League club to crash out to a Spanish team in the space of 24 hours.

United were beaten 2-1 at Old Trafford by Sevilla after a quickfire double by Wissam Ben Yedder on Tuesday.

There weren’t even three minutes on the clock when Lionel Messi put Barca ahead.

Ousmane Dembele knocked down for Luis Suarez to flick on cleverly, before Messi finished through the legs of Thibaut Courtois at his near post.

The Argentine legend turned provider when he beat two men to set up the second in the 20th minute.

Messi squared for Dembele who took a touch and rasped his shot past the outstretched hand of Courtois.

Free kick specialist Marcos Alonso crashed a near-perfect set piece into the right-hand post for Chelsea on the stroke of half time.

The Spanish wing back was at the centre of attention the other side of the break when his claims for a penalty were waved away by referee Damir Skomina.

But the efforts of these mere mortals had nothing on Messi.

He seized on possession on the edge of the box, veered left and nutmegged Courtois for the second time in the match.

Bayern Munich barnstormed their way into the Champions League quarter-finals past battered and bruised Besiktas.

Thiago opened the scoring on the night when he finished with ease from Thomas Muller’s cross.

And the Germans marched into a 7-0 aggregate lead 37 seconds after half time.

Rafinha whizzed in a wicked cross that keeper Tolga Zengin could only parry into the unfortunate Gokhan Gonul, off whom the ball trundled into the net.

Vagner Love pulled a comedy goal back after a bungled Bayern goal kick found its way to the Brazilian veteran, before he swiped home from on the floor.

Sandro Wagner forced over the line for Bayern’s third, though, despite the remarkable frenzy of the home crowd.

So Jupp Heynckes’ Bundesliga giants are through to the last eight without breaking sweat.