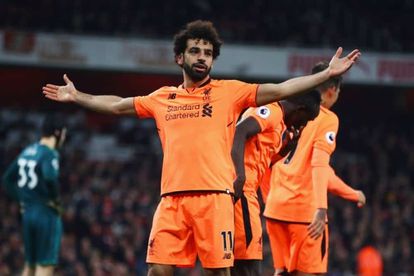 LONDON, ENGLAND – DECEMBER 22: Mohamed Salah of Liverpool celebrates as he scores their second goal during the Premier League match between Arsenal and Liverpool at Emirates Stadium on December 22, 2017 in London, England. (Photo by Julian Finney/Getty Images)

LONDON, ENGLAND – DECEMBER 22: Mohamed Salah of Liverpool celebrates as he scores their second goal during the Premier League match between Arsenal and Liverpool at Emirates Stadium on December 22, 2017 in London, England. (Photo by Julian Finney/Getty Images)

The Premier League pair have already contested a couple of enthralling tussles in domestic football.

And they now meet on the continental stage for the right to become the only EPL club in the last four.

Both sides reached this stage with ease against amenable opposition.

Liverpool unleashed hell on FC Porto, blazing to a 5-0 lead after their first leg at the Estadio do Dragao.

A 4-0 first leg victory over minnows FC Basel in the Champions League last 16 also allowed them to fully focus on domestic duties.

So focused were they that the Swiss side sneaked a second leg win at the Etihad, not that it mattered a jot.

Barcelona and Roma meet at the Camp Nou in the first leg of their Champions League quarter-final on Wednesday.

Barca blitzed past English Premier League champions Chelsea in the last 16, inspired as ever by Lionel Messi.

The Argentinian maestro had already scored an away goal as the first leg finished 1-1 at Stamford Bridge.

He went on to add another two as well as an assist as the Catalan giants rocketed into the last eight 4-1 on aggregate.

Roma squeaked their way past Shakhtar Donetsk to make the quarters.

Edin Dzeko finished coolly after half time in the second leg to seal progression past the Ukrainian champions thanks to the away goals rule.