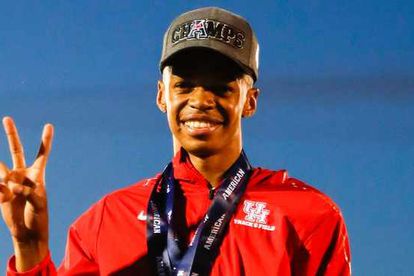 READ | ROGER FEDERER: ATHLETES NEED TO KNOW IF TOKYO OLYMPICS WILL GO AHEAD

The 20-year-old from Soweto put in a series of stunning performances at the American Outdoor Track & Field Championships in Florida on Sunday.

Running for the University of Houston Cougars, Maswanganyi – who attended St Alban’s College in Pretoria – blitzed the field in the 100m final, stopping the clock in 9.87.

However, what would’ve been a new South African record, was deemed “illegal” by the 3.8 metres per second (m/s) following wind.

The men’s South African 100m record thus remains the 9.89 achieved by Akani Simbine in Hungary in 2016.

Despite his performances, Maswanganyi is running out of time to qualify for the SA team for the upcoming Tokyo Olympics which are set to start on 23 July.

The University of Houston’s track and field head coach is former world record holder in the 100m, Leroy Burrell.

“The most important process for me was trusting my coaches and my teammates. My teammates were the ones who pushed me through… With the help of my teammates, the dynamics we have and pretty much how everyone worked together with the training staff, everything just kind of fell into place as the months progressed,” Maswanganyi was quoted as saying on Twitter by the UH website.

“They call us speed city for a reason. I owe most of my success to my coaches and my teammates because they pushed me a lot. They were there for me. At some meets, I didn’t perform the way I wanted to, but they were always there to motivate me.”