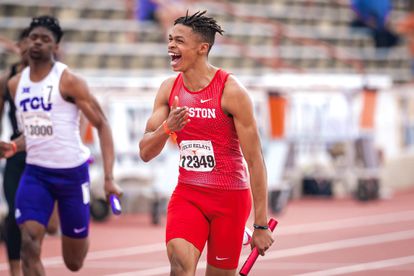 South Africa’s new sprint sensation Phatutshedzo Maswanganyi has officially clinched a double qualification for both the 100m and 200m events for the upcoming Tokyo Olympic Games.

Maswanganyi has been in inspired form on the track this month

The 20-year-old University of Houston freshman, first caught the eye of many South Africans with his record-breaking exploits for the university’s Cougars Athletics side, notching up extraordinary sub-10 as well as sub 20 times in both the 100m and 200m at the American Outdoor Track & Field Championships, where Maswanganyi clocked times of 9.87 in the 100m.

The Soweto-born athlete then followed that time up with an impressive time of 19.93 in the 200m, but unfortunately for Maswangwanyi, both those times were rendered unofficial by due to the strong wind assistance which stood at +3.8 metres per second (m/s) for the 100m, and then just a little lower at +3.3m/s for the 200m. The 100m feat would’ve hurt just a little as, without the wind assistance, he would’ve been in position of the South African record at that distance which is currently held by Akani Simbine at 9.89.

Maswanganyi was finally able to clinch his Olympic qualifying times

Maswangwanyi remained undeterred, however, as he once again proved his sprinting acumen, with or without wind assistance. This weekend, the former Tuks athlete took the blocks again, with the quest for Olympic qualification firmly on his mind at the NCAA West Preliminary rounds. He was able to achieve his objective in the 100m with an impressive time of 10.04 secs with the wind being (0.0), with the fact that he eased off in the end, perhaps a sign that there is more to come from the youngster.

He was able to see off stiffer competition in the 200m, however, with a time of 20.19 also being sufficient to qualify Maswanganyi for the 200m race in Tokyo next month.

He reacts to his qualification

Maswanganyi went on to his official Twitter platform to post the qualification videos, following them up with the caption “The road to the Olympic Games is no longer a dream but a reality for me. 100m & 200m Qualifier”

WATCH! Maswanganyi qualifies for the Olympics in both the 100m and 200m courtesy of @Tshezdom Twitter