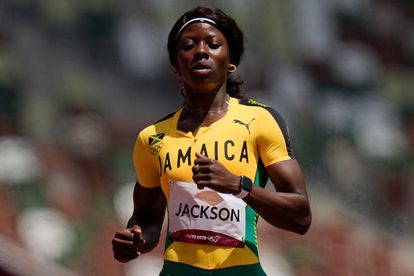 Shericka Jackson blew her chance of a 200m medal when she jogged the final few metres in the heats – and was knocked out of contention!

Shericka Jackson blew her chance of a 200m medal when she jogged the final few metres in the heats – and was knocked out of contention!

Elaine Thompson-Herah threw down the gauntlet to her rivals on Monday as the defending Olympic 200 metres champion won her semi-final in terrific style in a personal best of 21.66.

The 29-year-old, who is seeking to complete her second successive 100m/200m Olympic double, looks most under threat in Tuesday’s final from her compatriot Shelly-Ann Fraser-Pryce.

In dramatic fashion, the third Jamaican in the field, Shericka Jackson, – who won the bronze medal in the 100m – blew her chance of a 200m medal – and a possible clean sweep for the Caribbean nation – when she jogged the final few metres and was knocked out of contention!

Thompson-Herah said there was something about the Olympics that sparked her into her best form.

“I guess I’m an Olympic baby, an Olympic darling because I have not won a world championship title,” she said.

“It means a lot to me (now) and in the next three years to come.”

Fraser-Pryce, who is bidding to avenge her defeat by Thompson-Herah in the 100m final, timed 22.13 in winning her semi-final.

Fraser-Pryce has enjoyed far more success over 100m, with just the 2013 world title to show for the 200m.

“I had never run two 200 in a day, after running three rounds of 100. Definitely it takes a lot of commitment and I am glad I made it to the final,” she said.

“I’m feeling good so I’m looking forward to it. I’m very tired, my eyes look like someone punched me, but that is what championships are about.”

READ | SIMONE BILES IS BACK FOR THE BEAM FINAL!

Fraser-Pryce refused to predict where she will finish.

“I can’t give you a target, just run the best race I can run and hope that I will put myself in a very good position on the podium,” she said.

Thompson-Herah relaxed before she crossed the line but there was a surprise behind her as 18-year-old Namibian Christine Mboma passed America’s hope Gabby Thomas to take the second automatic qualifying position.

She timed 21.97 to set a new world under-20 record for the second time that day.

“I liked this race,” she said.

“It was tough, but I’m happy (to set) the world junior record.

“I broke it in the morning (in the heats) and to do it the semi as well, it is crazy.”

Harvard graduate Thomas – who ran the third fastest time in history at the US trials – looked stunned but went through as one of the two fastest losers.

Masilingi had a terrible start but recovered to pass Anthonique Strachan of the Bahamas and American Jenna Prandini to qualify.

Both the Namibians would have preferred to be running in the 400m at these Games but have been barred from doing so due to elevated testosterone levels.

Mboma ran the seventh fastest women’s one-lap time in history when she clocked 48.54sec in June. It was then that she underwent testing along with Masilingi that revealed the condition.

World Athletics prohibits women who have high levels of testosterone, which gives them added strength, from competing in races between 400m and a mile unless they undergo treatment to reduce the levels.

If the young Namibians find the final too intimidating, then the vastly more experienced duo of Marie Josee Ta Lou and Bahamian Shaunae Miller-Uibo could get among the medals.

Miller Uibo finished second behind Ta Lou in their semi and the 27-year-old refused to rule out also attempting to defend her 400m title she won in Rio in 2016.

At just 29, Dafne Schippers’ days of being a power in the event seem long ago as the 2015 world champion finished sixth in her race.