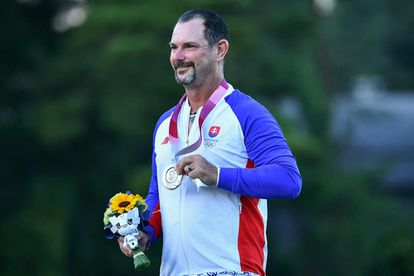 Rory Sabbatini was the unlikeliest of medalists on Sunday in the Tokyo Olympics golf competition as he blazed to a record-breaking 10-under-par 61 in the final round. Photo: AFP

Rory Sabbatini was the unlikeliest of medalists on Sunday in the Tokyo Olympics golf competition as he blazed to a record-breaking 10-under-par 61 in the final round. Photo: AFP

Slovakia via Durban! Rory Sabbatini was the unlikeliest of medalists on Sunday in the Tokyo Olympics golf competition as he blazed to a record-breaking 10-under-par 61 in the final round to take silver behind Xander Schauffele of the United States.

Extraordinarily, the man who won the World Cup of Golf with Trevor Immelman for South Africa in 2003 in one of six times he represented the country, made two bogeys during his brilliant final round – but an eagle and 10 birdies vaulted him 15 places up the leaderboard.

While there will be no regrets for the 45-year-old, there will be a little voice which will curse himself for dropping those shots which ultimately cost him a gold medal.

But the silver will mean the world to him, to his wife Martina Sabbatini Stofanikova, and to her cousin, Rastislav Antal, who is the vice-president of the Slovak Golf Association.

Whatever the motives for his change of citizenship, 8 002 registered golfers in the country will rejoice. And his annual visit to the country to run clinics will be heralded with much more enthusiasm than usual.

Immediately after the Games, he is flying back to Slovakia, where he is scheduled to visit Trnaya Golf Club, about a 30-minute drive north of the capital city of Bratislava.

Over the course of a three-and-a-half-hour clinic, Rory Sabbatini will do what he pledged he would do when he was first granted citizenship: spread the gospel of the game to the next generation of Slovak golfers.

And, in fairness to Sabbatini, he did not steal an Olympic birth from any ‘full’ Slovak. Far from it. The next highest ranked Slovak golfer is Petr Valasek, who is 848th in the world (and that’s after winning a European mini-tour event in Poland a couple of weeks ago).

Amidst the joy in Slovakia, a quiet toast to his success will be made at Royal Durban Golf Club.

The two ‘real’ South Africans in the Olympic field, Christiaan Bezuidenhout and Garrick Higgo, finished in a share of 16th and 53rd, respectively.

Bezuidenhout, who battled all week to read the greens – his usually deadly putting suffered as a result – saved his best for last with a four-under-par 67, while Higgo, who must be exhausted after a run of form which made him the hottest rookie on the planet, signed off with a one-over 72 in his final round.