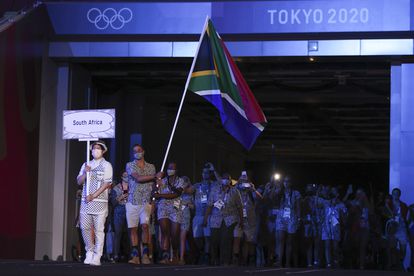 Only two athletes have claimed medals for South Africa during the Tokyo Olympics, with the showpiece event set to wrap-up this weekend. Golden opportunities have slipped from the grasp of Team SA time and time again – with Thursday bringing us yet another disappointment in the 4x100m relay race.

So near, so far: Team SA athletes fall short of medals

The squad exited the Tokyo Olympics in the cruellest possible manner when there was a baton mishap at the first changeover, and they failed to reach the final. Some of our top track stars, including Akani Simbine and Wayde van Niekerk, have missed out on medals too. The Blitzboks, fancied for a top prize, crashed out of the Sevens early doors.

Kyle Blignaut very, very nearly got himself amongst the medals, but the Pretoria-born shotput competitor finished sixth in his Olympic final. The 21-year-old did himself proud in an exceptionally tough field – but it’s tough to see where South Africa’s next medal will come from, and it might have to wait for the Paris Olympics in 2024.

Who can still win gold for Team SA?

Realistically, Gerda Steyn harbours our best hopes of glory between now and Sunday, in the women’s marathon race. The runner is the record-holder for the Comrades Marathon, she won the Two Oceans race in 2019, and last year, finished 7th in the London Marathon. Steyn is in action on Saturday, and needs the run of her life to claim a medal.

With three European Tour wins to her name – and a recent top 10 finish at the British Open – Ashleigh Buhai has an outside chance of claiming a medal in the women’s golf, by the time the ‘individual stroke play round‘ concludes on Saturday 7 August. However, should both athletes fall short, Team SA will leave Tokyo with just THREE medals.

Tatjana Schoenmaker is the golden girl of these Olympics, after she won both the top prize AND a silver medal in the pool. Our only other medal also came from an aquatic pursuit, with Bianca Buitendag claiming silver in the surfing final.

And that’s it. As it stands, Team SA is ranked a lowly joint-40th in the medal table, tied with Slovakia. It’s a far cry from our Olympic exploits of 2016, where South Africa brought 10 honours back home – including two golds.