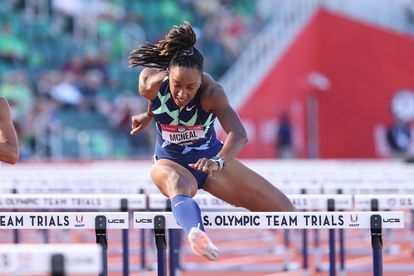 Women’s 100 metres hurdles Olympic champion Brianna McNeal was officially banned from defending her title in Tokyo in a decision made on Friday.

McNeal banned from defending her title in Tokyo

McNeal had launched an appeal with the the Court of Arbitration for Sport (CAS) but the body upheld the five-year sanction for anti-doping offences handed down earlier this year.

The 29-year-old US athlete, who won gold at the 2016 Rio Games, was banned for allegedly tampering with the anti-doping testing process.

McNeal finished second in last month’s US trials for the postponed Tokyo Olympics, which are set to begin in three weeks, having been allowed to compete pending her appeal to the CAS.

CAS on Friday upheld the original verdict against her shattering her dreams of defending the title. The Athletics Integrity Unit had provisionally suspended her in January.

Both McNeal and World Athletics challenged the decision issued by the WA Disciplinary Tribunal on April 21 in seperate appeals.

In that tribunal decision, it was determined that McNeal had committed an anti-doping rule violation and a five-year period of ineligibility backdated to August 15, 2020 was imposed.

The CAS panel dismissed the appeal filed by McNeal and partially upheld the appeal lodged by WA.

The Lausanne-based court confirmed the decision on 2 July, as well as adding one additional element. McNeal has been stripped of any and all elite victories bertween February and August 2020.

“All competitive results obtained by Ms. Brianna McNeal between February 13, 2020 and August 14, 2020 shall be disqualified with all resulting consequences including forfeiture of any medals, titles, points, prize money and prizes,” the court said.

According to a statement from CAS, the grounds for its decision will be issued at a later date.

McNeal made a name for hersefl by winning gold at the 2013 world championships in Moscow.

McNeal won her Olympic and world golds while running under her maiden name of Rollins and owns the joint fourth-fastest run in 100m hurdles history, having clocked 12.26sec in Des Moines in 2013. She continues to protest her innocence.

“As far as my situation goes, I am still me! Very clean, very honest and transparent.

“Once all of this blows over I will provide more details of what’s actually going on.”