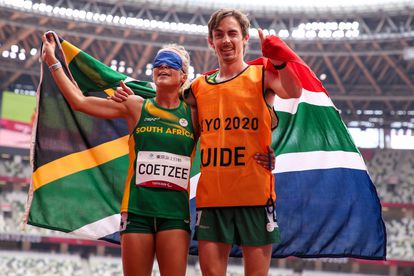 Louzanne Coetzee produced the performance of her career to win a 1 500m Paralympic silver medal in a race where she left everything out there on the Olympic Stadium track, writes Gary Lemke from Japan.

The 28-year-old was competing in her sixth major championship event since 2013 and was understandably emotional after winning silver in a career best 4:40.96 in the women’s T11 final.

Coetzee and her guide, Estean Badenhorst, carved nearly nine seconds off their qualifying time to finish second behind Mexico’s Monica Rodriguez Saavedra, who broke the world record in taking gold in 4:37.40.

To put Coetzee’s effort into perspective, the race was held in 32 degree heat with a humidity percentage in the 70s and her time was only 2.04 seconds off the previous world record set by China’s Jin Zheng at Rio 2016.

In Rio, Coetzee herself had been DQ’d after a ruling that her guide had stepped in front of her. However, that memory, along with a fourth-place finish in the 2017 World Championships, were extinguished for good on this stifling Tokyo morning.

“I can’t believe it,” Coetzee said as the magnitude of her effort, winning Team SA’s third medal at these Paralympics, started sinking in.

“I have been competing for eight years and this is my first medal. I’m just overwhelmed. I couldn’t have asked for a better race, a better guide, better preparation, I’m just very thankful for how everything went down.”

A field of six athletes and their guides faced the starter at the 1 500m mark and Coetzee and Badenhorst immediately went to the front.

“That was the plan,” Badenhorst said, speaking on his racing partner’s behalf.

“The tactic was to be a front runner. We had trained on time trials against the clock, not on actual races as we haven’t had much opportunity to race a lot.”

Down the back straight approaching the bend, the world champion, Rodriguez Saavedra, went past the South Africans to hit the front, but that was no bad thing.

“The Mexican had come past and we knew that she could keep that pace up, so we were comfortable to stick behind her.”

Rodriguez Saveedra took the field through 800m in 2:28.87, but behind her there was quite a bit of scrimmaging happening, Coetzee admitted that things had got her “a little scared. I knew I could trust Estean, but there was a lot of action going on and switching of places, which had made it a tougher race to run than had been the case in the heats. This was a bit scary, but Estean had warned me before that it might get like that, and I trusted him, so it all turned out fine.”

Badenhorst admitted that he was “quite surprised” they went from 700m out.

“We expected barging around the 600m (to go) mark and we had wanted to be leading with 600m left, but we couldn’t get to the front.”

At the bell, the Polish athlete Joanna Mazur had joined issue among the chasers, but Coetzee quickly reasserted her authority, and it was with 300m to go that Coetzee and Badenhorst said, “let’s go”, to try close the gap on the Mexicans who were 40m ahead.

“By that stage we knew we could medal,” Badenhorst said.

“Louzanne held up her end of the bargain and ran brilliantly, keeping going in the last 100m to run a new PB.”

They had set out to run a 3:42 and crossed the line in clear second position in an African record 4:40.96, with bronze going to Kenya’s Nancy Koech nearly five seconds further back.

“There wasn’t much left in the tank at the end,” Coetzee admitted.

“I’m the kind of runner who, if I could keep up with the gold medallist I would have. This is my limit – for now!” she said.

That “limit” is only 3.5 seconds behind Saveedra Rodriguez, who is now the world champion, Paralympic champion and world record holder. Coetzee and Badenhorst have plenty to celebrate, both now and going forward.

Coetzee still has the T12 marathon left in her schedule, with the race starting at 06:30 Tokyo time on Sunday.