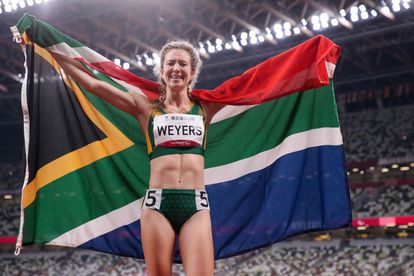 South Africans rejoiced when Ntando Mahlangu leaped to victory at the Tokyo Paralympics on Saturday.

Mahlangu, still only 19-years-old, took the gold medal in the men’s long jump T63 final, setting an astonishing new world record with a distance of 7.17m.

Incredibly, prior to the event, Mahlangu’s personal best had only been 6.47m – a full 70cm shorter!

Mahlangu was competing as one of three T61 athletes (double amputee above the knee and competing with two protheses) against seven T63 long jumpers (single amputee who use one prosthetic).

Because there weren’t enough athletes to warrant a T61 event on its own, Mahlangu had to compete in the T63 final.

Mahlangu held the T61 world record heading into the final at 6.47m.

South Africa President Cyril Ramaphosa congratulated Mahlangu on his achievement in a tweet.

The delayed 2020 Tokyo Paralympics will conclude on Sunday, 5 September.