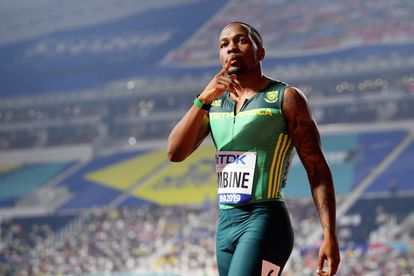 Akani Simbine is right where he wants to be. That is, in Lane 4 in his heat later on Saturday as he starts his build-up to be crowned the fastest man on earth on Sunday. Photo: Getty Images

Akani Simbine is right where he wants to be. That is, in Lane 4 in his heat later on Saturday as he starts his build-up to be crowned the fastest man on earth on Sunday. Photo: Getty Images

Akani Simbine is right where he wants to be, writes Gary Lemke on the official Team SA website.

That is, in Lane 4 in his heat later on Saturday as he starts his build-up to be crowned the fastest man on earth on Sunday.

Thinking that Akani Simbine might win the men’s 100m gold medal at these Tokyo 2020 Olympics is anything but fantasy.

He comes into the competition ranked No 2 in the world, having lowered the African record to 9.84 in Hungary in early July. He’s the reigning Commonwealth champion and finished fifth at the 2016 Rio Games.

He’s now 27, experienced, confident and hungry. And he’s relaxed, which makes a huge difference. He also starts his campaign at the Tokyo Stadium later in lane four, which in this testosterone-filled environment, boosts the ego immensely.

READ | CHAD LE CLOS: I LOST FAIR AND SQUARE, BUT I’LL BE BACK!

“I started off the year with a bang, and that was the plan. We (he and coach Werner Prinsloo) made sure we continued with momentum coming into these Tokyo Games.

“We ticked off the boxes and I ran my personal best, ran an African record (9.84) and I’m peaking at the right time. We’re ready to do well.”

There sure looks to be a vulnerability in this year’s field, not just because the great Usain Bolt has moved on. The Americans don’t look like the intimidating force of previous years and the Jamaicans have also lost their aura.

Trayvon Bromwell is the fastest man in the world for 2021 and his USA back-up is Ronnie Baker. But Simbine has nothing to fear from either of  them as he looks to become the first South African to win 100m Olympic gold in 113 years. Yes, Reggie Walker of South Africa was Olympic 100m gold medallist at the 1908 London Games, dashing across the line in 10.08.

Akani Simbine is ready to rewrite history though.

“Over the years I’ve gained a lot of experience. Being in finals and the world champs, Olympics … I’m Commonwealth champion (2018) and have been learning from the greats. I pick their minds, draw from their experience. Where I’m at as an athlete have gained so much knowledge as a sprinter.

“I am a mature sprinter and I know how to control races, I now know how to run a championship. I’ve just missed out on medals at the major events before but now I want to change that. I’m confident and want to go fight for a podium finish. I want to be the fastest man in the world.”

What message does Akani Simbine have for his competitors as he starts his gold medal quest in the heats on Saturday night before contesting the semi-finals and then final some 24 hours later?

“You’ve got to pace yourself through the rounds, building in every round till you get to the final. You want your body to be at its best in the final.

“Now it’s about winning the race, making sure you’re No 1 and sending the messages to my opponents right from the heats.”