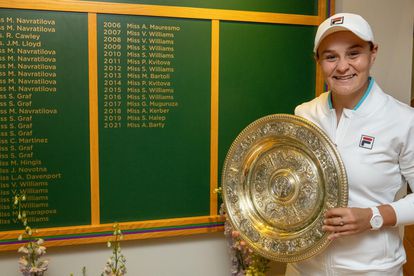 Wimbledon has decided to replace the Grand Slam’s honours board to remove “Miss” and “Mrs” in front of the names of female winners. Photo: Getty Images

Wimbledon has decided to replace the Grand Slam’s honours board to remove “Miss” and “Mrs” in front of the names of female winners. Photo: Getty Images

Wimbledon chiefs have decided to replace the Grand Slam’s honours board to remove “Miss” and “Mrs” in front of the names of female winners, according to a report on Thursday.

The All England Lawn Tennis Club’s honours board has used the honorifics in front of female champions but not male winners.

However, the Times reported on Thursday that, having dropped “Miss” and “Mrs” when umpires announced the names of female players during matches in 2019, Wimbledon has also modernised the honours boards.

Women’s names are now written by first-name initial then surname.

In an age of increasing equality, the All England Club is also updating the tradition of giving married women who won titles the initials and surname of their husbands.

After her marriage to John Lloyd her 1981 title was recorded as Mrs J M Lloyd, but the new board will now have C Evert Lloyd for that entry.

Djokovic expressed surprise in 2019 after Wimbledon told umpires not to refer to female players with their titles.

“I thought that tradition was very unique and very special; I thought it was nice,” he said.

“It’s definitely not easy to alter or change any traditions here that have been present for many years. It’s quite surprising that they’ve done that.”

Wimbledon’s decision comes as the grass-court tournament deals with the backlash to their ban of Russian and Belarusian players from competing in this year’s event.

The ATP, WTA and ITF responded by stating that no ranking points would be awarded to competitors at Wimbledon.