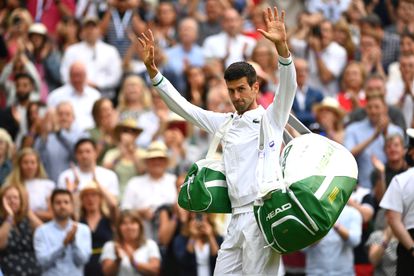 Australia’s Thanasi Kokkinakis will attempt to demolish the “brick wall” of Novak Djokovic at Wimbledon on Wednesday. Photo: EPA/NEIL HALL

Australia’s Thanasi Kokkinakis will attempt to demolish the “brick wall” of Novak Djokovic at Wimbledon on Wednesday. Photo: EPA/NEIL HALL

Australia’s Thanasi Kokkinakis attempts to demolish the “brick wall” of Novak Djokovic at Wimbledon on Wednesday while Andy Murray needs to defuse the big-serving threat of John Isner.

READ | TIME TO RETIRE? SERENA WILLIAMS CRASHES OUT IN ROUND 1

Six-time champion Djokovic, chasing a 21st Grand Slam title, defeated Kokkinakis in their only previous meeting at the French Open in 2015.

The 26-year-old Australian still bears the scars even though it was seven years ago.

“I’m going to swing free hopefully and play my game. He’s a brick wall, so you kind of got to beat him,” said the world number 79.

“He’s not going to beat himself.”

Kokkinakis won his first match at Wimbledon at the third attempt when he saw off Poland’s Kamil Majchrzak on Monday.

The Australian’s career has been stop-start with 18 months missed due a shoulder injury between 2015 and 2016 and all of 2020 because of mononucleosis.

However, he is not one to suffer stage fright.

At the Miami Masters in 2018 he made light of his lowly status as a 175th-ranked qualifier to stun defending champion Roger Federer.

Novak Djokovic made history in Round 1

Djokovic made the second round with a four-set win over South Korea’s Kwon Soon-woo, becoming the first player, male or female, to register 80 wins at all four Grand Slam tournaments.

Two-time champion Murray puts his 8-0 record against Isner on the line in their second-round clash.

Former number one Murray, now down at 52 in the world, needed four sets to defeat Australia’s James Duckworth on Monday.

At one point, the British star dropped in an underarm serve to carve out a winning point, much to the delight of the Centre Court crowd.

“I don’t know why some people find it disrespectful,” said Murray.

“Certainly more and more players have started returning from further behind the baseline now to give themselves an advantage to return.

“The underarm serve is a way of saying, If you’re going to step back there, then I’m going to possibly throw that in.”

Despite his losing record against Murray, 37-year-old Isner has never played the Briton on grass.

He is confident he has the weapons at his disposal having fired 54 aces and 97 winners to knock out qualifier Enzo Couacaud on Monday.

“I don’t really care about results too much. I just try and enjoy myself at these amazing events that I get to play in throughout the world.”

Third seed Casper Ruud and Spanish teen sensation Carlos Alcaraz aim for places in the last 32 for the first time.

French Open runner-up Ruud tackles Ugo Humbert of France while Alcaraz, who needed five sets to get past Jan-Lennard Struff on Monday, meets Tallon Griekspoor of the Netherlands.

There will be an emotional clash in the women’s second round as Lesia Tsurenko and Anhelina Kalinina meet in an all-Ukraine clash.

For Tsurenko, the tie represents a chance to remind the world that Ukraine still needs its support as well as “heavy weapons” to fight the Russian invasion.

Kalinina is using her prize money to donate to humanitarian aid in Ukraine, including her own family, whose home in Irpin was destroyed.

“I’m helping as much as I can to the people that I even don’t know sometimes. I’m not a superstar, I’m just helping with what I can.”