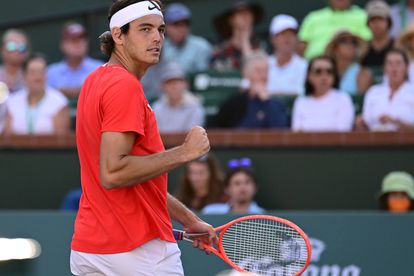 Fritz, ranked 20th in the world, claimed his second career title and his first at the elite Masters 1000 level while denying Nadal a record-equalling 37th Masters crown.

The 24-year-old American achieved his biggest triumph despite an injured right ankle that was so painful when he tested it Sunday morning he didn’t think he’d be able to play.

“It was just an emotional roller coaster all day,” said Fritz, who spent hours leading up to the match receiving treatment to numb his ankle after “basically almost crying because I thought I was going to have to pull out.

“It was a game-time decision,” Fritz said.

“A lot of members of my team wanted me to not play the match. I’m never going to let them forget that because I went on the court and it was a complete non-issue, didn’t feel it at all, didn’t hinder me at all.”

The 35-year-old Nadal, meanwhile, was pushing himself through pain, twice receiving treatment on his upper body for a yet-to-be diagnosed problem that not only hurt but also affected his breathing.

Nadal had already said he would skip next week’s Miami Masters to give his body a rest and prepare for the clay court season.

After fearing a foot injury that halted his 2021 campaign might end his career, the Spaniard claimed a record-setting 21st Grand Slam singles title with an epic comeback victory over Daniil Medvedev in the Australian Open final, then won the title at Acapulco.

Fritz said he was aware that there was “stuff going on” with Nadal even before the match began.

“I can’t imagine how banged up someone’s body must be after 20-something straight matches, playing as much as he has,” Fritz said.

“I didn’t let it change how I was going to play at all. I treated it like I was playing the Rafa that I know, that everybody knows.”

Battling to the end, Nadal saved one match point in the 10th game of the second set, but in a tense tiebreaker that decided it all Fritz proved too much.

After Nadal spun a forehand wide to give up another match point, Fritz put it away with yet another of his big forehand winners.

Fritz’s fitness concerns were at the forefront when the American fell on the very first point of the match.

Nadal, coming off a draining three-set semi-final victory over 18-year-old compatriot Carlos Alcaraz, appeared to have found his range when he held at love to make it 4-1.

But he was unable to make any inroads on Fritz’s serve until the American served for the set at 5-2 and Nadal converted his only break chance of the set when Fritz sent a forehand long.

However, Nadal was unable to build any momentum, immediately surrendering the break and the set after 39 minutes.

Nadal took a medical timeout between sets and gained the first break of the second set for a 2-1 lead.

Fritz opened the door for him with a double fault, came up with a big serve then fell to a forehand winner on the Spaniard’s second break chance.

But the American broke back immediately and saved four break points in the next game and they went with serve to the tiebreaker, Fritz finally sealing it on his first match point with a forehand winner to the corner.

“I just kept telling myself there’s no reason why I can’t win this,” said Fritz, who became the first American men’s champion at Indian Wells since Andre Agassi in 2001 and the youngest Indian Wells men’s winner since Novak Djokovic in 2011.

Learner drivers and how to safely share the road with them

Middelburg hospital security guards shot by guards from another company