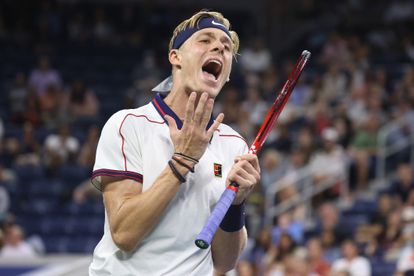 Denis Shapovalov has apologised after losing his cool with the chair umpire during his victory over Lorenzo Sonego at the Rome Masters. Photo: Al Bello/Getty Images

Denis Shapovalov has apologised after losing his cool with the chair umpire during his victory over Lorenzo Sonego at the Rome Masters. Photo: Al Bello/Getty Images

Canadian Denis Shapovalov apologised after losing his cool in an argument with chair umpire Richard Haigh during his 7-6 (7/5), 3-6, 6-3 victory over Italian Lorenzo Sonego at the Rome Masters on Monday.

Late in the second set, Shapovalov had a second serve overruled by Haigh and crossed the net to his opponent’s side of the court to show the official the ball mark.

The umpire explained to Shapovalov he would have to give him a code violation – which would result in a point penalty since it was his second of the match – because players are not allowed to cross over the net.

“That’s just the rule,” said the umpire before Shapovalov responded: “No it’s not. It’s stupid.”

When the Italian crowd erupted, booing Shapovalov for the lengthy stoppage in play, the 13th seed aimed a swear word at the fans as he yelled at them to “shut up”.

Denis Shapovalov also tried to get a heckler ejected from the stadium before play resumed.

The Canadian’s second serve was deemed out resulting in a double fault, and he received a point penalty which handed Sonego a break and eventually the second set.

‘I’ll know the rule for next time’ – Denis Shapovalov

After clinching the decider, Shapovalov apologised to the umpire and later acknowledged he was wrong to cross the net.

“It was the heat of the moment so I got emotional. I apologised after. Obviously it was my mistake. There’s nothing they can do,” Shapovalov said in his post-match press conference.

“I’ll know the rule for next time. I definitely won’t step over the net.”

Shapovalov will play Georgian Nikoloz Basilashvili in his Round of 32 Rome Masters match later on Tuesday.