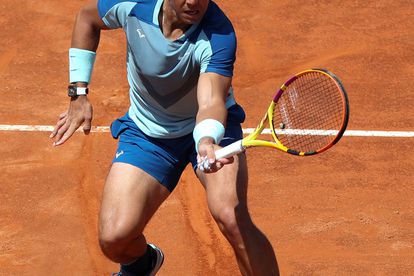 Rafael Nadal crashed out of the Italian Open in the third round with the record 10-time Rome winner complaining of a recurring foot problem. Photo: Twitter @ATPTour

Rafael Nadal crashed out of the Italian Open in the third round with the record 10-time Rome winner complaining of a recurring foot problem. Photo: Twitter @ATPTour

Defending champion Rafael Nadal crashed out of the Italian Open in the third round on Thursday with the record 10-time Rome winner complaining of a recurring foot problem after a shock 1-6, 7-5, 6-2 defeat by Canadian Denis Shapovalov.

Defeat in Rome for ‘King of Clay’ Nadal casts doubt over his prospects at the upcoming French Open, where he has been crowned champion 13 times but faces a threat from teenage phenomenon Carlos Alcaraz.

The 35-year-old, who had reached at least the quarter-finals every year in Rome since 2008, had been out for six weeks with a rib injury before returning for last week’s tournament in Madrid.

Nadal began limping in the third set, later telling reporters that a foot problem had flared up during the second set but couldn’t say whether he would be able to take part at Roland Garros.

“I’m not injured, I am a player living with an injury. That’s it,” Nadal told reporters.

“It’s something that is there unfortunately and my day by day is difficult. I am trying hard but of course it is difficult for me. A lot of days I can’t practice.

“I don’t want to take anything away from Denis… today is for him so well done to him.”

Rafael Nadal has won an all-time record 21 Grand Slam titles in a glittering two-decade career which may now finally be reaching its downturn.

World No 16 Shapovalov, who had pushed Nadal all the way when knocked out at this stage of the tournament last year, will now face Casper Ruud in the quarter-finals.

“It definitely sucked to see him in pain at the end… He brings so much to our sport so hopefully he’s fit and ready to go for the French,” said Shapovalov.

“It’s super satisfying to beat the best player on clay of all time.”

Last year’s Rome runner-up Novak Djokovic swept past Swiss veteran Stan Wawrinka 6-2, 6-2 in one hour, 16 minutes to reach the quarter-finals as he bids for a sixth Italian Open title.

Djokovic is in his record-extending 369th week as the world number one and must reach at least the semis to avoid losing his top ranking spot to Daniil Medvedev.

Wawrinka, whose first-round victory over Reilly Opelka was his first win in 15 months, was no match for top seed Djokovic and beyond a few classic passing shots he offered little resistance.

“It’s great to see Stan back… You can see that physically he’s still not there where he wants to be but nevertheless he’s Stan Wawrinka. He can hurt you if you give time,” Djokovic said after the match.

Monte Carlo Masters champion Stefanos Tsitsipas was forced to work harder for his 4-6, 6-0, 6-3 win over former Paris Masters winner Karen Khachanov which sets him up with home hope Jannick Sinner.

Swiatek, 20, is the favourite for the French Open which starts later this month and showed why in an impressive performance against Azarenka, herself a former top-ranked player and the two-time Australian Open winner.

However she had to come back from losing the first three games of the match and then battled through a series of long games before finally breaking Azarenka’s resolve early in the decisive second set.

“I’m happy that I could kind of win ugly in the first set, then improve in the second,” Swiatek told reporters.

“It gives me confidence that even when my game is not hundred percent good, I can still win matches. So it works both ways.”

Swiatek will be expected to beat her quarter-final opponent Bianca Andreescu after the world number 90 came through against Petra Martic 6-4, 6-4.

Results from the ATP/WTA Italian Open on Thursday (x denotes seeding, players representing Russia and Belarus are banned from competing under the name or flag of their countries until further notice):