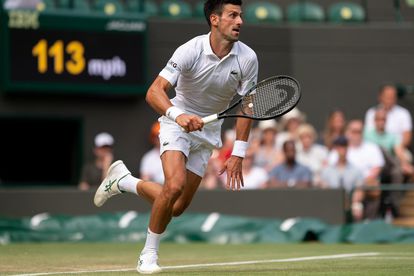 Novak Djokovic and Rafael Nadal headline the title chase at Wimbledon where Roger Federer and ranking points will be missing. Photo: Twitter @DjokerNole

Novak Djokovic and Rafael Nadal headline the title chase at Wimbledon where Roger Federer and ranking points will be missing. Photo: Twitter @DjokerNole

Novak Djokovic and Rafael Nadal headline the title chase at Wimbledon where eight-time champion Roger Federer, the world’s top two players as well as valuable ranking points will all be missing.

CONGRATS! | BABY NADAL ON THE WAY!

Djokovic is bidding for a seventh title at the All England Club to move level with US great Pete Sampras.

Nadal, fresh from a 14th French Open victory and a record-extending 22nd major, is halfway to the first men’s calendar Grand Slam in more than half a century.

The season’s third Slam tournament has already made political waves even before the first ball is served on Monday.

PICTURES | EUGENIE BOUCHARD TURNS HEADS AT THE CANADIAN GRAND PRIX IN HER BRA!

The decision to ban Russian and Belarusian players in the aftermath of the invasion of Ukraine means there is no place for world number one Daniil Medvedev or eighth-ranked Andrey Rublev.

Both the ATP and WTA, who control the men’s and women’s tours, retaliated by stripping ranking points from the tournament.

For the first time since his debut in 1999 – notwithstanding the Covid-cancelled 2020 edition – Federer will be a no-show as the 40-year-old recovers from knee surgery.

Djokovic and Nadal, ranked three and four, are therefore the top seeds meaning if they are to face each other for the 60th time, it can only be in the final.

His refusal to be vaccinated against Covid-19 will rule him out of the US Open later this year.

“As of today I’m not allowed to enter the States under these circumstances. That is an extra motivation to do well here,” said Djokovic who gets play at Wimbledon underway on Monday against Kwon Soon-woo of South Korea.

A bruising quarter-final loss to Nadal at the French Open which saw him deposed as champion in Paris will also provide extra motivation.

Nadal won the last of his two Wimbledon titles in 2010 having captured his first with an epic triumph over Federer two years earlier.

The 36-year-old Spaniard arrives at Wimbledon with the Australian and French Opens secured.

He is halfway to becoming only the third man – and first since Rod Laver in 1969 – to complete a calendar Grand Slam.

Nadal has endured a bittersweet relationship with Wimbledon.

There was a question mark over his durability for the two weeks at Wimbledon having played the entire French Open with his troublesome left foot anaesthetised.

Nadal has since undergone a course of radiofrequency stimulation, a treatment aimed at reducing nerve pain in his foot.

“I can walk normal most of the days, almost every single day,” said the 36-year-old Spaniard who faces Argentina’s Francesco Cerundolo in his opening match Tuesday.

“When I wake up, I don’t have this pain that I was having for the last year and a half.”

Should Djokovic or Nadal falter, then Italy’s Matteo Berrettini, runner-up to Djokovic in last year’s final, would be the most likely beneficiary.

World No 11 Berrettini has won back-to-back grasscourt titles at Stuttgart and Queen’s.

“I don’t know if I’m the favourite as Novak and Rafa (Nadal) are always there; Rafa has already won two Slams and no-one expected him to win in Australia,” said 26-year-old Berrettini of his Wimbledon chances.

“I don’t feel like I’m the favourite but I know I can do it, I can’t pull the wool over people’s eyes.”

Of the remaining top 10, French Open runner-up Casper Ruud has lost in the first round on his two previous trips to Wimbledon.

Stefanos Tsitsipas has fallen at the first hurdle three times out of four but is fresh from a maiden grasscourt title in Mallorca on Saturday.

Spanish teen star Carlos Alcaraz only made his main draw debut in 2021, reaching the second round.

Felix Auger-Aliassime made the last-eight last year while 10th-ranked Hubert Hurkacz, the champion on grass in Halle last weekend, was a semi-finalist in 2021.

On the way, the Polish player defeated Federer in the quarter-finals which was the Swiss star’s last appearance on the tour.