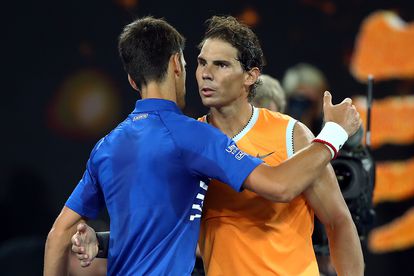 Novak Djokovic renews his 16-year rivalry with Rafael Nadal at the French Open on Tuesday with a semi-final spot at stake and where victory for the world number one could end the 13-time champion’s Roland Garros career.

Rafael Nadal, who turns 36 on Friday, puts his record of 109 wins and just three losses in Paris since his title-winning debut in 2005 on the line against the defending champion.

The Spaniard was taken to five sets for only the third time at the tournament by 21-year-old Felix Auger-Aliassime in the fourth round.

In the immediate aftermath of that victory, Nadal admitted that not only was this year’s French Open at stake but possibly his entire playing future.

“I know my situation, and I accept it,” said Nadal, who arrived in Paris unsure if he would be able to take part after suffering a recurrence of a chronic foot injury which has plagued him for most of his career.

“I am just enjoying the fact that I am here for one more year. And being honest, every match that I play here, I don’t know if it’s going to be my last at Roland Garros.”

Overall, Djokovic leads Nadal 30-28 since their first career meeting at the 2006 French Open.

Nadal has a 19-8 edge on clay and has won seven of the pair’s nine meetings in Paris.

Novak Djokovic, however, came out on top in the semi-finals at Roland Garros in 2021 on his way to a second title.

That defeat took a physical toll on Nadal who then skipped Wimbledon, the Olympics and the US Open.

With Djokovic deported from Melbourne on the eve of the Australian Open, Nadal seized the opportunity to claim a record-setting 21st Grand Slam title, breaking a tie with Djokovic and Roger Federer.

Djokovic has reached the last eight with ease. He has won 22 sets in a row, a run stretching back to his Italian Open triumph in Rome.

Adding an extra twist was a battle of wills over scheduling which Nadal lost on Monday when organisers selected the quarter-final for the night session under the Court Philippe Chatrier lights.

“I don’t like to play on clay during the night, because the humidity is higher, the ball is slower, and there can be very heavy conditions especially when it’s cold,” said Rafael Nadal.

Djokovic hinted he would prefer to face Nadal as late as possible.

“All I will say is Rafa and I would make different requests,” he said.

“But requests are not always accepted. The tournament director, along with TV, broadcasters, I think in the end of the day that that’s who decides.”

Nadal’s coach Carlos Moya said that the Spaniard’s opinion should have carried weight.

“He has won the tournament 13 times, and if he has a request, you should listen to him.”

Carlos Alcaraz, who faces Alexander Zverev on Tuesday, said it would have been “unfair” if he was ordered to play after 9pm for the third time.

Alcaraz, 19, is the youngest man to make the last eight in Paris since Djokovic in 2006.

The sixth seed had to save a match point to defeat compatriot Albert Ramos-Vinolas in the second round but has otherwise been unburdened by expectations.

Alcaraz tackles third-seeded Zverev having defeated the German in the final of the Madrid Masters where he also knocked out both Nadal and Djokovic.

While Djokovic, Nadal, Zverev and Alcaraz battle in the top of the draw, the bottom section has been blown wide open by the fourth-round exits of second-ranked Daniil Medvedev and number four Stefanos Tsitsipas, the 2021 runner-up.

As a result, one of Holger Rune, Casper Ruud, Andrey Rublev or 2014 US Open champion Marin Cilic will make Sunday’s final.

French Open quarter-final line-ups (x denotes seeding; players representing Russia and Belarus are banned from competing under the name or flag of their countries):