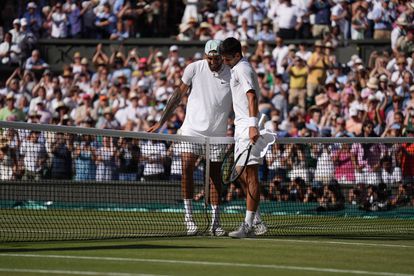 Novak Djokovic officially declared a “bromance” with Nick Kyrgios after he beat the Australian on Sunday to win his seventh Wimbledon crown. Photo: Twitter @Wimbledon

Novak Djokovic officially declared a “bromance” with Nick Kyrgios after he beat the Australian on Sunday to win his seventh Wimbledon crown. Photo: Twitter @Wimbledon

Novak Djokovic officially declared a “bromance” with Nick Kyrgios after he beat the Australian on Sunday to win his seventh Wimbledon crown.

But their relations warmed when Kyrgios became one of the few players to offer the Serb support in his Australia deportation saga in January, related to his Covid vaccination status.

They had agreed to meet for dinner after the Wimbledon final during an Instagram chat, with the winner footing the bill.

“If you are inviting me for a drink or dinner, I accept. PS winner of tomorrow (Sunday) pays,” said Novak Djokovic, to which the Australian responded: “Deal, let’s go to a nightclub and go nuts.”

After Sunday’s win on a sun-baked Centre Court, Djokovic had warm words for his defeated opponent.

“I really respect you a lot, you are an amazing talent and now everything is starting to come together for you,” said the 35-year-old champion.

“I never thought I would say so many nice things about you considering the relationship. OK it’s officially a bromance.

“The winner buys dinner – that’s why he lost. I don’t know if we’re going to make it happen tonight but this is the start of a wonderful relationship between us.

“I didn’t respond to the nightclub question because my wife was next to me but let’s start with dinner and drinks.”

Djokovic clambered up into the player’s box after sealing his victory, giving his wife, Jelena, a passionate kiss on their wedding anniversary.

“Darling, happy anniversary – this is my present,” he said.

Kyrgios, 27, playing in his first Grand Slam final, described Djokovic as a “bit of a god”.

“You’ve won these championships that many times I don’t even know any more,” he said.

When asked whether reaching a first Wimbledon final had made him hungry for more, he said: “Absolutely not. I’m so tired, honestly. Myself, my team, we’re all exhausted. We’ve played so much tennis.

“I’m really happy with this result and maybe one day I’ll be here again but I don’t know about that.”