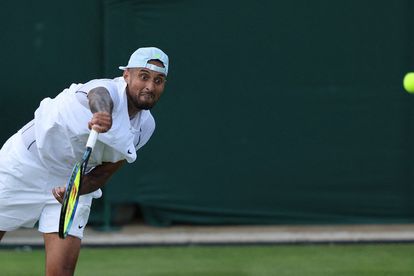 Nick Kyrgios buried his rage to ease into the third round at Wimbledon and warned: “I just wanted to remind everyone that I’m pretty good.” Photo: ADRIAN DENNIS
|
Credit: AFP

Nick Kyrgios buried his rage to ease into the third round at Wimbledon and warned: “I just wanted to remind everyone that I’m pretty good.” Photo: ADRIAN DENNIS
|
Credit: AFP

Nick Kyrgios buried the rage he showed in his Wimbledon opener to ease into the third round on Thursday and warned: “I just wanted to remind everyone that I’m pretty good.”

The volatile Australian pulled off an impressive 6-2, 6-3, 6-1 win over Serbian 26th seed Filip Krajinovic to make the last 32 for the sixth time.

“If I can just continue to play like that, I’m very dangerous,” said Kyrgios, who will face world number five Stefanos Tsitsipas for a place in the fourth round.

Nick Kyrgios fired 24 aces and a total of 50 winners past Krajinovic, who made the final on grass at Queen’s in the run-up to Wimbledon.

He also only conceded nine points on his own serve in a rapid-fire 85-minute win on Court Two.

The 27-year-old Australian, who made the quarter-finals on debut in 2014, did not face a single break point.

“I just wanted to remind everyone that I am pretty good,” he said.

“I was nowhere near my best in the first round but today I was in my zone.

“Wimbledon is my best chance of winning a Grand Slam. I have had it circled in my calendar all year.

“I still have a tough draw but I couldn’t have played any better today.”

Kyrgios’ five-set opening win over Paul Jubb of Britain was marred by his admission that he spat in the direction of fans whom he accused of being disrespectful.

One British newspaper described his behaviour as “cretinous”.

Kyrgios showed off his new leg tattoo on Thursday, quoting Oscar Wilde: “Give a man a mask and he will become his true self.”

In his post-match news conference, he was his usually combative self, taking aim at the media for their coverage of his opening match.

Kyrgios had called a lineswoman “a snitch” for reporting his behaviour to the umpire while he remains under investigation for the spitting incident.

“I just feel like people just don’t give me respect sometimes because of other things that I do,” he said.

“There was just nothing the media possibly could tell me I did wrong today. I just know that you can’t possibly ask me anything and stir anything up.

“And I love it because then you can’t write anything. What are you going to say? Nothing today. Dumbfounded all of you.”

With his place in the last 32 secured, Kyrgios pulled out of the doubles, where he was to resume his Australian Open winning partnership with Thanasi Kokkinakis.

After a testy exchange with a reporter over the spitting incident, Kyrgios shrugged off questions over any potential sanction.

“I couldn’t care less if there is an investigation. I know what I bring to the sport,” he said.

“I just feel like I’m comfortable in my own skin. Some people love to just tear me down. It’s just not possible anymore.”

It was announced late on Thursday that Kyrgios had been fined $10 000 for Tuesday’s incidents.

Nick Kyrgios will take a 3-1 career lead over Tsitsipas into their last-32 clash on Saturday.

That includes a win on grass in Halle earlier this month.

“I feel like everyone here knows who Nick is,” said Tsitsipas.

“We have had many great matches against each other. I respect him for his game and the way he fights when he wants to.”

Tsitsipas defeated Australia’s Jordan Thompson 6-2, 6-3, 7-5 to set up the clash against Kyrgios.