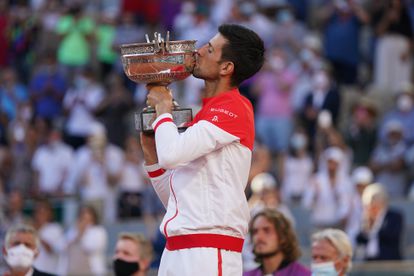 Defending champion Novak Djokovic, 13-time winner Rafael Nadal and new teenage star Carlos Alcaraz were ALL drawn in the same half of the French Open on Thursday. Photo: Twitter @rolandgarros

Defending champion Novak Djokovic, 13-time winner Rafael Nadal and new teenage star Carlos Alcaraz were ALL drawn in the same half of the French Open on Thursday. Photo: Twitter @rolandgarros

Defending champion Novak Djokovic, 13-time winner Rafael Nadal and new teenage star Carlos Alcaraz were ALL drawn in the same half of the French Open on Thursday.

World number one Djokovic and Nadal, ranked five, are seeded to meet as early as the quarter-finals.

Alcaraz, 19, is bidding to become just the eighth teenager to win a Grand Slam men’s title.

He could face either Djokovic or Nadal, who holds a record 21 majors, in the semi-finals in a top-heavy draw for the second Grand Slam of the season.

“In Paris, I always play very strong. Last year, it was the toughest major that I had won.”

Djokovic had to twice come from two sets down last year to beat Lorenzo Musetti in the last-16 and Stefanos Tsitspas in the final having also beaten Nadal from a set behind in a bruising semi-final.

“Musetti, Rafa, Tsitsipas – every match lasted more than three hours, a lot of sets. It was exhausting but I loved the outcome.”

Djokovic, who celebrates his 35th birthday on Sunday, the opening day at Roland Garros, faces 94th-ranked Yoshihito Nishioka of Japan in the first round.

Nadal starts against Australia’s Jordan Thompson as he looks to extend his French Open record of only three defeats in 108 matches at the tournament since his title-winning debut in 2005.

Alcaraz, who has a season-leading four titles in 2022 including Masters crowns in Miami and Madrid as well as Rio and Barcelona, begins against a qualifier.

The teenager knocked out Djokovic and Nadal on his way to victory in the Spanish capital.

Second seed Daniil Medvedev, the US Open champion, faces Argentina’s Facundo Bagnis in his first round.

Third-ranked Alexander Zverev meets a qualifier while Tsitsipas has a tough opener against Musetti.

In the women’s draw, world number one Iga Swiatek, the 2020 champion, is on a 28-match win streak and has pocketed five successive titles this season.

Four-time major winner Naomi Osaka, a former world number one but now down at 38, returns to Paris 12 months after she pulled out ahead of the second round, citing mental health issues.

FRENCH OPEN STARTS ON SUNDAY, 22 MAY

She had also been threatened with expulsion and fined by organisers over her refusal to attend press conferences.

Anisimova knocked Osaka out of the Australian Open in the third round this year.

Tunisia’s Ons Jabeur, seeded six and the champion on clay in Madrid last month, takes on Magda Linette of Poland in her first round clash.