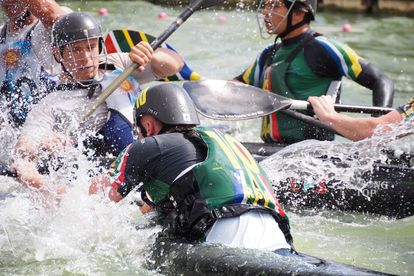 South African Under 21 players tussle with the Argentine players on their way to a convincing win over the South American rivals at the recent ICF Canoe Polo Championships in France.

South African Under 21 players tussle with the Argentine players on their way to a convincing win over the South American rivals at the recent ICF Canoe Polo Championships in France.

Team South Africa leave the event in Saint Omer, France having learnt many valuable lessons about the sport going forward.

The tour kicked off with the Gekko Canoe Polo Tournament in Belgium before the players travelled to France for the global showpiece, however coach Chris de Bree’s visa never arrived sending the side to Europe without a coach.

“A mammoth effort was then undertaken by the South Africans already in Belgium for the tournaments to transport the team and boats from the airport to Ghent and do some training sessions to prepare them for the tournament that weekend. Replacement coach, Don Wewege, who was a former coach of the u21 team and currently lives in Europe was roped in to coach and manage the team for the trip.”

The team was not expecting much success in Gekko due to the turbulent start to the tour but surprised everyone with consistently improving game play and eventually finishing ninth in their divsion out of the 19 teams entered.

This was a successful opportunity for them to prepare for their first World Championship game two days later.

ALSO READ: Elite athletes and SADAG team up to run for mental health

Getting to the World Championships was a difficult undertaking, however through the help of a number of other federations and the ICF, Team South Africa got their boats to France and were able to walk through the town with the South African flag waved high.

The team’s first game was against the New Zealand U21 men and the 7-0 defeat was a rude awakening to the extremely high level of canoe polo being played at these World Championships.

This seemed to light the fire under the players who came out guns blazing against eventual bronze medalists Italy. A vastly improved team had the Italians rattled and for a large part of the game with just a single goal separating the two teams. Eventually the power of the Italians won over and the scoreline changed rapidly in the final minutes.

This would set the trend for the tour as the team would, for the remaining games, play an extremely high level of polo, often holding very strong teams or leading comfortably and then run out of steam in the final minutes.

Their final game was a convincing win against Argentina resulting in a finishing position of 15th, just one place off auto-qualifying for the 2024 World Championships.

This is the closest a South African U21 team has come to auto-qualifying and a positive result for the sport. The team also had one of the toughest pools in the tournament with the other three teams of New Zealand, Italy and Spain all finishing in the top six and Spain becoming the world champions.

SA polo can be extremely proud of the level our U21 team produced at this tournament and this bodes well for future international tournaments.

Preparations are already being made to ensure the team qualifies for the 2024 World Championships in China at the African Champs next year.