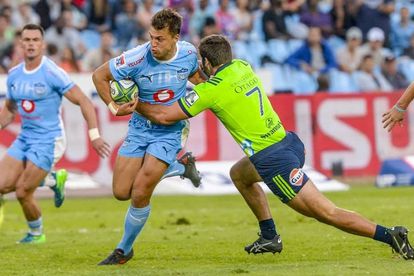 PRETORIA, SOUTH AFRICA – APRIL 28: Handre Pollard of the Bulls with possession during the Super Rugby match between Vodacom Bulls and Highlanders at Loftus Versfeld on April 28, 2018 in Pretoria, South Africa. (Photo by Sydney Seshibedi/Gallo Images)

PRETORIA, SOUTH AFRICA – APRIL 28: Handre Pollard of the Bulls with possession during the Super Rugby match between Vodacom Bulls and Highlanders at Loftus Versfeld on April 28, 2018 in Pretoria, South Africa. (Photo by Sydney Seshibedi/Gallo Images)

The Bulls will travel to the Singapore National Stadium for their Super Rugby clash against the Sunwolves with a number of new faces as well as a new captain in flyhalf Handre Pollard this weekend.

According to the Bulls official website, the playmaker takes over from regular captain, Burger Odendaal, who was not considered due to injury, in a side that welcomes back a number of players who saw little action this year.

“It is great to be back playing in the tournament again. We had a good break, but also had some time together to sort out elements in our play that lacked consistency,” said Bulls coach, John Mitchell.

“The Sunwolves are always dangerous, especially on home turf and we will have to be very principled in our approach and execution if we want to stay in the contest.”

Pollard said they need to find their momentum and rhythm as soon as possible:

“We have not played together as a team for a while, but that should not be a problem for us. We know each other pretty well by now and even the guys coming back after injury have played in the tournament before. It will be a challenge, as the Sunwolves have shown their competitiveness in the competition, but ultimately the onus will be on us and how badly we want the win. There is still an outside chance, so we cannot afford any mistakes.”

According to SA Rugby Magazine, Gerhard van den Heever will start at fullback for the Sunwolves against the Bulls on Saturday.

The inclusion of Van der Heever is one of nine changes to the Sunwolves team.

Other changes in the backline see inside centre Michael Little, wing Akihito Yamada and scrumhalf Keisuke Uchida all return to the run-on side.

In the new-look pack, flank Willie Britz, lock James Moore and prop and captain Craig Millar are the only survivors.

Two other former Bulls players – Hencus van Wyk and Grant Hattingh – have been selected on the bench.

Jamba Ulengo is back at wing and Hanro Liebenberg at No 8 while Jannes Kirsten makes a first appearance this season on the side of the scrum.

Ulengo and Kirsten have not played at all in this year’s tournament and Liebenberg’s last action was on 14 April against the Sharks.

The midfield combination, where Johnny Kotze will partner Jesse Kriel in Odendaal’s absence, is new as well, while Pollard will have Embrose Papier on his inside.

Edgar Marutlulle, Simpiwe Matanzima and Morne Smith will all make first appearances for the season as well, with the latter two also debuting in the competition and Vodacom Bulls colours.

BREAKING: SA to host next two World Rugby U20 Championships