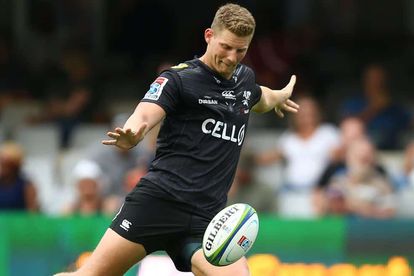 The Sharks are looking to finish the pool stages on a high when they take on the Jaguares in Durban this weekend.

Last week, the Sharks had the opportunity to move into a qualifying position after a win over the Stormers but after losing 27-16, they did not succeed.

According to SA Rugby Magazine, it’s left the Sharks having to hope for a Highlanders victory over the eighth-placed Rebels this weekend – that would then open the door for the Sharks to sneak through to the knockout stage.

Should the Rebels make the most of that and claim a rare win in Dunedin, it would completely change the complexion of the Sharks-Jaguares clash. Similarly, if the Lions beat the Bulls in the earlier game, the Jaguares will know that they can no longer play for top spot in the SA conference.

We chatted to @CellC Sharks lock, Tyler Paul, ahead of their must-win encounter over the @JaguaresARG, and he let us in on how the team looks forward to putting last weekends game behind them as they head into their final regular season game.#OurSharksForever pic.twitter.com/tN9pg44Me3

According to the Sharks’ website, Beast Mtawarira returns in place of Juan Schoeman for the Sharks match against the Jaguares, while Kobus van Wyk replaces the injured Sbu Nkosi on the wing.

Scans have indicated that Sbu has a syndesmosis sprain on his left ankle and will, unfortunately, be out for approximately 8 -12 weeks. The good news is that Daniel du Preez has been cleared to play and takes his place in the No 8 jersey.

One player who is enjoying his extended playing role is Sharks lock Tyler Paul who has come in to replace the injured Stephan Lewies and has taken his opportunities with both hands.

“As a player, you want to be in the mix, starting regularly because that’s how you get noticed further down the line,” he explains. “It’s unfortunate that we’ve had some injuries, but it’s been nice for me to get opportunities to start week in and week out.

“But with that comes responsibilities; obviously performing primarily, doing my job on matchday.”

There is no getting away from the fact that there is enormous pressure on the Sharks this week, but Paul emphasizes that this is not something the players shy away from.

“You want to play in high pressure games in professional rugby, these are the moments that make or break players or teams. So, this weekend is do or die for us, we have to win. Unfortunately there is another result we have to count on but if that goes our way and we pull out all the stops in our match then we will be fine.

“The vibe in the camp has been good, training has gone well and the guys are ready and will be at their best.”

The first round match against the Jaguares was won by the Argentineans in Buenos Aires but that has no bearing on this match.

“Going there is never easy, the travel factor is a major influence, but we can’t use that as any excuse for the result there,” he points out. “They are coming here to our home ground, and if we match them upfront – the Jaguares are known for their physicality – and lay a good platform, our backs should do well.

“And if we can maintain composure and keep calm in the high pressure situations and remain focused, then hopefully we’ll prevail.”

The Jaguares made a total of ten changes to their team that lost against the Bulls last weekend. With the goal of qualifying for the playoffs already achieved, coach Mario Ledesma is resting most of his first-choice players for next week.

Jerónimo de la Fuente and Tomás Lezana will have rest, while the rest of the team that was in Pretoria, will shift to the bench. Matías Alemanno, Pablo Matera, Matías Moroni, Ramiro Moyano and Bautista Delguy are all included in the starting XV though.

On This Day: What happened on 02 August?