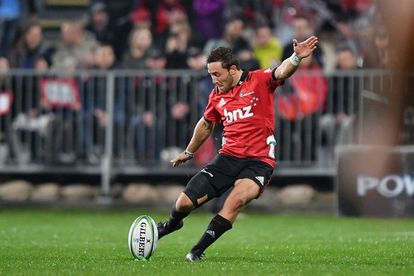 CHRISTCHURCH, NEW ZEALAND – MARCH 23: Mitchell Hunt of the Crusaders kicks a conversion during the round six Super Rugby match between the Crusaders and the Bulls on March 23, 2018 in Christchurch, New Zealand. (Photo by Kai Schwoerer/Getty Images)

CHRISTCHURCH, NEW ZEALAND – MARCH 23: Mitchell Hunt of the Crusaders kicks a conversion during the round six Super Rugby match between the Crusaders and the Bulls on March 23, 2018 in Christchurch, New Zealand. (Photo by Kai Schwoerer/Getty Images)

In grim conditions in Christchurch, the Crusaders got back to winning ways with a 33-14 win over the Bulls. Coach John Mitchell’s woes continue, with that impressive win in their opening Super Rugby clash now long forgotten.

The Crusaders scored first with Scott Barrett touching down as the hosts mauled their way over the line. Mitchell Hunt slotted his conversion to help extend the lead.

It was tough going, though, and as is so often the case in tetchy clashes, poor discipline crept in and Tim Perry was given a yellow card continuous infringements in the 25th minute.

But being a man down didn’t stop the Crusaders from scoring. Codie Taylor crossed over and Hunt added two more points to extend the lead to 14-0.

Eventually, the Bulls hit back through a moment of individual brilliance from Travis Ismaiel who beat three Crusaders players to jot over. The kick was on point, too, and the visitors might have thought they were back in it.

However, Crusaders did what they do best: absorbed and transferred the pressure and added seven more points through a Jack Goodhue try and Hunt’s conversion just before half-time to take a 21-7 lead into the break.

Not too long after the restart, the hosts scored their bonus point try with Goodhue adding his second of the match and Hunt making no mistake with the kick.

What followed was about 20 minutes of sustained pressure from both sides and, eventually, the Crusaders switched off for a second and the Bulls pounced.

After holding possession and setting up a few attacks, the Bulls eventually worked their way over the line through replacement forward and debutant Marco van Staden.

As they have done so often, though, the Crusaders responded brilliantly. A fantastic cross kick from Hunt crossed awkwardly, but George Bridge picked it up and muscled his way through the Bulls’ defence to restore the bonus point for the home side.

From there, Hunt missed his first kick of the night, from an awkward angle, but it hardly mattered as the Crusaders had the win all but wrapped up.

Orlando Pirates goal woes: Only these SIX players have scored this season