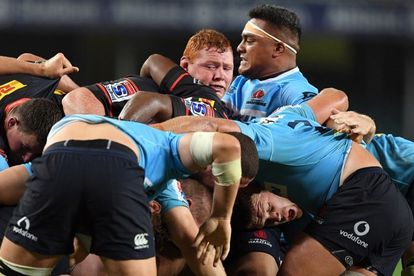 South Africa’s Stormers prop Steven Kitshoff (C) pops out of the scrum as he pushes against the Australia’s Waratahs scrum during their Super rugby union match in Sydney on February 24, 2018. / AFP PHOTO / WILLIAM WEST /

South Africa’s Stormers prop Steven Kitshoff (C) pops out of the scrum as he pushes against the Australia’s Waratahs scrum during their Super rugby union match in Sydney on February 24, 2018. / AFP PHOTO / WILLIAM WEST /

It’s quite a weekend of Super Rugby action. Two South African teams hit the road for their fixtures – and both are in serious need of a win.

The Stormers, in particular, need some inspiration away from home. After a positive start to their season, beating the Jaguares, they have lost two on the trot and need to make some magic happen in Friday’s early kick off against the Highlanders.

The Bulls, meanwhile, are also back to the drawing board. With an impressive win over the Hurricanes in their opening match, they were battered by the Lions in the weekend’s Jukskei derby and face a potentially tricky Reds team in Saturday’s mid-morning kick off.

Speaking of the Lions, they have gone charging to the top of the Super Rugby table and will host the Blues in the late Saturday afternoon kick off while the Sharks are expected to come out winners when they host the Sunwolves mid-afternoon on the same day.

Elsewhere, all eyes are on the Crusaders to see if they can improve on discipline and keep their hand on that trophy they’re defending.

It’s do or die for the Stormers as they hit the road in desperate search of a win. They’re in line for a tough tour and face a tricky match on Friday morning. Check out our full preview here.

NERSA says Chairperson is not conflicted after social media backlash

Stormers: Why Damian Willemse has been moved back to fullback?