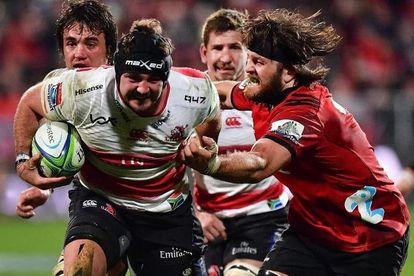 Lions’ Cyle Brink (L) is tackled by Crusaders’ Heiden Bedwell-Curtis (R) during the Super Rugby final between the Canterbury Crusaders of New Zealand and the Golden Lions of South Africa at AMI Stadium in Christchurch on August 4, 2018. / AFP PHOTO / Marty MELVILLE

Lions’ Cyle Brink (L) is tackled by Crusaders’ Heiden Bedwell-Curtis (R) during the Super Rugby final between the Canterbury Crusaders of New Zealand and the Golden Lions of South Africa at AMI Stadium in Christchurch on August 4, 2018. / AFP PHOTO / Marty MELVILLE

Richie Mo’unga pulled all the strings as the Crusaders beat the Lions 37-18 to claim a ninth Super Rugby title and their second in a row on Saturday.

The defending champions, who started as red-hot favourites in Christchurch, prodaed an heroic defensive effort with Mo’unga clinically engineering the points when chances arose.

The fly-half had a hand in all the scoring moves as the Crusaders led 20-6 at half-time and then responded with a try after both of the Lions’ tries in the second period.

The South African visitors enjoyed nearly two-thirds of possession and territory throughout the final, but could not produce the variety of play to crack the Crusaders’ defence.

Six times when they tried their most potent weapon, the driving maul, they were pushed back.

The Crusaders outscored the Lions by four converted tries to two and Mo’unga added three penalties as Super Rugby’ss dominant side stretched their winning streak to 15 matches.

The Lions have a reputation for being slow starters, as they were in last year’s final in Johannesburg when they trailed 25-3 at half-time and lost 25-17.

But a year on, they were fired up at the start and applied the early pressure.

Ruan Combrinck sliced through Kieran Read and Sam Whitelock on a 40-metre dash to the line, where the Lions pounded the Crusaders defence for 10 minutes.

But the best they could achieve was three points from an Elton Jantjies penalty.

The Crusaders struck back immediately with a penalty from Mo’unga, whose overhead pass then put Seta Tamanivalu over in the corner.

A raking Mo’unga kick and a Jantjies error won the Crusaders a five-metre scrum which led to Mo’unga’s second penalty, before the fly-half took a high ball under pressure and launched a counter-attack that led to David Havili’s try.

After Jantjies and Mo’unga traded penalties either side of half-time, Cyle Brink scored the Lions’ first try to close the gap to 23-13.

While the Crusaders were primed to protect their line, they were also ready to strike back when necessary.

Mitchell Drummond went under the posts to reopen a 17-point margin, and when Malcolm Marx scored for the Lions – with the Crusaders’ Ryan Crotty in the sin bin — the home side effectively sealed victory with a try to Scott Barrett.