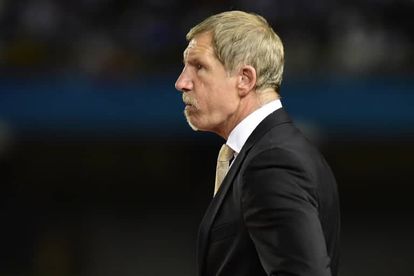 Bafana Bafana coach Stuart Baxter has slammed the decision made by the South African Football Association (Safa) to take Saturday’s Afcon qualifier against Lybia to Durban.

Moses Mabhida Stadium will get its first competitive football fixture since the chaotic scenes of last season’s Nedbank Cup semi-final and, according to Sport24, financial constraints influenced the decision to take the match to the venue.

However, Baxter would have preferred the match be played at a higher altitude, as he believes playing “The Mediterranean Knights” in the coastal city amounts to playing into their hands as they are used to playing at sea level.

“I’ve always enjoyed playing in Durban – until Cape Verde‚ I suppose‚” he told the media.

“But the venue‚ as a sea-level venue for sea-level people‚ I suppose you would want to take them to altitude.”

In their last match played at the venue, Bafana Bafana were stunned by the unfashionable Cape Verde who made their quest for a spot in Russia nigh impossible, as the Islanders registered a 2-1 victory in the World Cup qualifiers.

Baxter did not divulge the exact reasons why his request to have Saturday’s fixture moved to an inland venue was denied.

“I was told that was impossible,” he added.

“I don’t want to go into the reasons and whys and wherefores. We’re here. We’re playing the game here.

“I’ve always enjoyed playing here before. I hope the people of Durban will get behind us. And it’s up to the players now to make sure that that is not an issue. Because in football he who thinks he can and he who thinks he cannot are probably both right. It’s up to us to say‚ ‘we can’‚ and then get on with it.”

With one round of matches in the Afcon qualifiers played so far, Libya currently top Group E, thanks to their 5-1 walloping of Seychelles, and are followed by Bafana Bafana, who registered an impressive 2-0 win away to Nigeria in their opener.