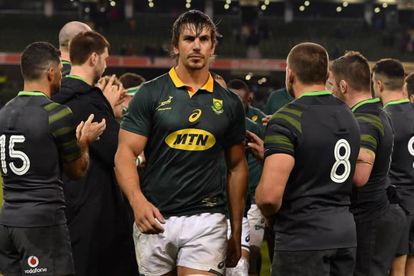 DUBLIN, IRELAND – NOVEMBER 11: Eben Etzebeth of South Africa (Captain) leads his side form the pitch after the Castle Lager Outgoing Tour match between Ireland and South Africa at Aviva Stadium on November 11, 2017 in Dublin, Ireland. (Photo by Brendan Moran/Sportsfile/Gallo Images)

DUBLIN, IRELAND – NOVEMBER 11: Eben Etzebeth of South Africa (Captain) leads his side form the pitch after the Castle Lager Outgoing Tour match between Ireland and South Africa at Aviva Stadium on November 11, 2017 in Dublin, Ireland. (Photo by Brendan Moran/Sportsfile/Gallo Images)

Rassie Erasmus, South Africa’s Director of Rugby, announced a squad of 35 players on Monday. The announcement comes two weeks before the Springboks enter the 2018 Rugby Championship.

The Springboks will be hoping to build on the momentum gathered from their 2-1 series win against England earlier this season.

Erasmus is facing a gauntlet of obstacles ahead of next year’s IRB Rugby World Cup and has confirmed that he has his sights set on the long-term goal of being global title contenders.

Working with a relatively young Springbok squad has afforded Erasmus the opportunity to experiment with various player-combinations while developing a strong work ethic within the team.

The head coach and director of Springbok rugby have also called in reinforcements from their overseas club commitments – a move which has proven invaluable so far this season.

Eben Etzebeth returns to the Springboks

The gigantic powerhouse which is Eben Etzebeth is set to make his long-awaited return to international rugby in this year’s Rugby Championship.

The towering lock strongman and effective enforcer was forced to the watch from the sidelines following a niggling shoulder injury, which required multiple operations.

The Johannesburg based Lions rugby team made it all the way to this year’s Super Rugby final. While they were defeated in their closing encounter, the spirit and determination of this year’s runners-up is a confidence builder for Springbok rugby.

Although hooker, Malcolm Marx, missed the June internationals due to a hamstring injury, his raw display of strength and power in the Super Rugby league sealed the Lions a place in the final. Undoubtedly the best hooker in South Africa, if not the world – Marx makes his return to the green and gold this August.

Former captain of the Springboks, Warren Whiteley, returns to the green and gold following a long absence due to injury. While superstar Siya Kolisi still retains the Springbok captaincy, Erasmus had this to say on the return of Whiteley and Etzebeth:

“Eben and Warren have been out of the Bok mix for a while because of injury so it’s very pleasing to have them back in the squad, while Malcolm has regained his good form with the Emirates Lions since recovering from his injury.”

Three uncapped players join the Springbok squad in preparation for the Rugby Championship.

While the Springbok team set to take the field in August appears to be in good shape, there are some players who will be forced to watch from the couch, due to injury.

What used to be known as the tri-nations, prior to the joining of Argentina, the Rugby Championship is a fierce competition, unrivalled only by the IRB Rugby World Cup.

The best rugby teams in the Southern Hemisphere will face off against each other in the competition which begins on 18 August 2018.

The Springboks skill and resolve will be put to the test when they face off against bitter rivals, New Zealand on 15 September.

And while a match-up against the All Blacks is definitely regarded as the toughest encounter, Australia and even Argentina aren’t going to be push-overs.