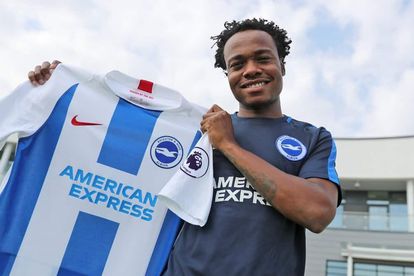 It’s the most watched league in South Africa, yet residents of Mzansi have found opportunities to play in the English Premier League few and far between.

It’s fast, frenetic and utterly bloody freezing most of the time. By nature, the EPL doesn’t suit South African players. However, a select band of brothers have managed to etch their name in English football folklore over the years.

Percy Tau completed his transfer to Brighton on Friday, but it looks like he’ll have to wait a while before becoming the 14th SA representative in England’s top flight. Tau will spend his early days will the club out on loan.

But if you’re ready for a trip down memory lane, we’ve got all the goodies you’re going to need for the journey. Time to revel in nostalgia.

Every South African to play in the English Premier League:

He wasn’t exactly prolific, but on his day he was unstoppable. The Capetonian formed a formidable partnership with Jonathan Johanssen at the turn of the millennium, and our Shaun is still widely regarded as a cult hero for The Addicks.

The tough-tackling midfielder enjoyed a seven-year career in England. Commentators all across the UK are now relieved they don’t have to try and pronounce his name on a weekly basis any more.

He certainly made a splash in the Premier League (sorry, it’s irresistible). He made over 100 appearances for Charlton after a successful spell at the Trotters. Fish was also famous for some wonderful performances in the 1996 African Cup of Nations and 1998 World Cup for Bafana Bafana.

Of course. The only South African to ever play for Manchester United, and the incredible Sir Alex Ferguson. He spent seven years at Old Trafford and was a very able deputy in the holding midfield role. He won league titles and an FA Cup medal with the Red Devils.

It’s not fair that anyone should have to follow Quinton Fortune, but such is life. Mabizela had more disciplinary issues than he did appearances for Spurs. However, he left the North Londoners with an absolute screamer to remember him by (50 seconds in):

Fondly known as “the other South African who played for Leeds”, he’s a man of many distinctions. He remains the only Bafana player with an FA Cup hat-trick to his name, and received South Africa’s first ever international red card, playing against Zambia in 1992.

In his debut season for Rovers, he was positively rampant. He bagged 24 goals in his first ever season of English football. He moved down south to West Ham after notching 52 goals in 150 games for Blackburn, but it all went sour.

Plagued by injury, fitness issues and a ‘lazy’ attitude, Karen Brady – the owner of The Hammers – offered him £1m to tear up his contract and leave. He did so, without ever finding the onion bag for the Londoners. Can now be found gobbing off as head coach of Cape Town City.

The marauding centre-half knew his way around a crunching tackle, and marshalled the defences of both Rovers and Pompey as if he were a war general. He chalked up 177 appearances in the English Premier League, and earned himself the nickname of ‘The Axe’, due to his ability to chop down an attacker. Hard to disagree!

He wasn’t a star that shone too brightly in the EPL. Injuries limited his chances, and he was subject to the incredible rumour that he’d been caught drink-driving in just his pants. However, he was found to be fully clothed. He showed flashes of brilliance every now and then, scoring in the ‘old farm’ derby for Norwich against Ipswich.

The only South African to play for three different top-flight clubs in England excelled for Everton, winning their player of the season accolade for the 2009-10 season. He left Sunderland just a few months ago, as he was powerless to stop the David Moyes banter express plummeting towards the Championship.

This guy was so good, five blokes from Leeds named their band after his first club and became global superstars. The former Kaizer Chief’s defender is perhaps the most-loved South African to grace the Premier League, as the Leeds faithful adored him for his brutal, uncompromising style of defending.

He was initially signed as part of the Phil Masinga deal, to ‘keep Phil happy’ so he’d have a mate abroad. However, Radebe gloriously upstaged him with 201 appearances for United.

He scored an absolute thunder-bastard for Bournemouth during their remarkable rise to the English Premier League. Then really hasn’t done much since. He made a few fleeting appearances in the top division since, but nothing more. Here’s that aforementioned thunder-bastard, though:

Barnsley had no right to be in the English Premier League during the 1997-98 season, but the plucky underdogs made a good fist of it in their only EPL campaign. Erik Tinkler was the beating heart of the Tykes and he eventually left Barnsley following nine goals in 99 appearances.

Pitso Mosimane to Royal AM? THREE reasons he will say YES

WATCH | SA ranked 19th in the WORLD for criminality [VIDEO]