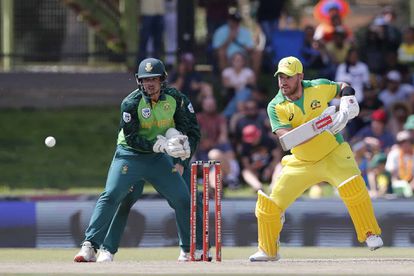 South Africa vs Australia: Quinton de Kock won the toss and elected to put Australia in to bat in the third ODI between the two nations.

South Africa lead the three-match series 2-0 having clinched it with a record chase in Bloemfontein in midweek.

The Proteas called uncapped Dolphins seamer Daryn Dupavillon into the squad as a late replacement for Beuran Hendricks who is ill.

Dupavillon has enjoyed a stellar One-Day Cup run in domestic cricket helping the Dolphins to the top of the log.

Mark Boucher’s tenure as Team Director has been marked by the desire to give opportunities to franchise performers widening the pool of players he can consider for Proteas selection.

Lutho Sipamla is also given a run meaning that the Proteas sport a very green bowling attack. Lungi Ngidi has been rested ahead of the three-match ODI series away against India later this month.

De Kock expects there to be a little something in the wicket first up and wants to see if his young bowlers can get anything out of what looks to be a good batting strip.

“It’s a fresh wicket, a bit in it this morning,” said de Kock after the toss.

Josh Hazlewood comes in for Mitchell Starc who has jetted home to watch his wife Alyssa Healy play in the T20 World Cup final in Melbourne.

Pat Cummins and Ashton Agar are also rested with Jhye and Kane Richardson (No relation) coming in to the playing XI.