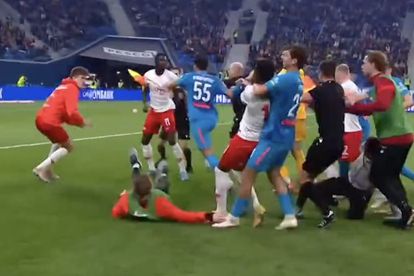 A Russia Cup tie between Zenit St Petersburg’s and Spartak Moscow will go down in infamy after six players were sent off following a mass brawl in injury time at the end of the 90 minutes.

Zenit St Petersburg eventually went on to win the drama-filled tie 4-2 on penalties, but the match will be remembered for the wild fight that broke about between multiple players and other team representatives.

When order was eventually restored, the referee brandished six red cards – handed out to three players from each side – which were all shown to players who were not technically playing.

You can watch the wild footage of the brawl below: