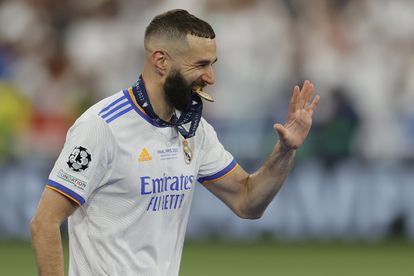 For Karim Benzema, the UEFA men’s player of the year prize is unlikely to be the last recognition he receives. Photo: EPA/RONALD WITTEK

For Karim Benzema, the UEFA men’s player of the year prize is unlikely to be the last recognition he receives. Photo: EPA/RONALD WITTEK

Karim Benzema admitted he had done all he could with Real Madrid this season to make himself favourite for the Ballon d’Or after helping the Spanish giants beat Liverpool 1-0 in Saturday’s Champions League final in Paris.

Benzema did not score in the final at the Stade de France as Vinicius Junior netted the only goal of the game, but the Frenchman finished as the Champions League’s top scorer with 15 including 10 in the knockout rounds.

“Of course,” the 34-year-old told Canal Plus when asked if the Ballon d’Or was on his mind after a season in which he also won La Liga with Real Madrid.

“Now I will join up with the national team but I don’t think I can do much more with my club.

“We will see what happens, but in any case I am proud of what I have done.”

Karim Benzema will join up with the France squad for a series of UEFA Nations League games in June after finishing the season with 44 goals altogether for Real Madrid.

He scored hat-tricks against Paris Saint-Germain and Chelsea in the Champions League knockout rounds and netted three times across the two legs of the semi-final against Manchester City.

“There is no luck,” he said in reference to a series of remarkable comeback wins on their run to the final.

“You can be lucky once but not every time. We deserve our victory. We put in the effort, we came back every time, we never gave up.

“Every player is important in our squad, whether they are a starter or a substitute, or they don’t play often but give everything in training.”

Benzema, who has now won five Champions Leagues with Real Madrid, added that ending the season as the competition’s top scorer was “exceptional”.

“But the most important thing is to win this fifth Champions League.”

The winner of the Ballon d’Or will be revealed in a ceremony in Paris in October, before this year’s Soccer World Cup in Qatar.