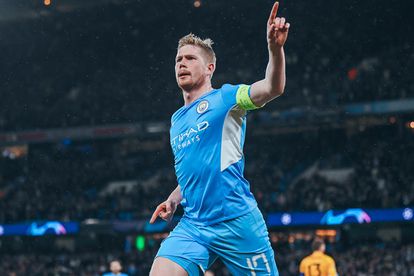 Pep Guardiola’s side spent much of the night banging their heads against the red and white brick wall assembled by Atletico’s massed defence at the Etihad Stadium.

But Guardiola sent on Phil Foden midway through the second half and his sublime pass teed up De Bruyne to finally reward City for their territorial dominance.

While Guardiola launched a water bottle in a frenzied celebration that underlined what a testing night it had been for his team, the City boss will know the tie is far from over.

At the start of a season-defining 11 days for treble-chasing City, this was a qualified success that justified their patient performance.

But Atletico have already knocked out Manchester United in the last 16 this season, while Liverpool fell victim to Diego Simeone’s side when the Reds were the holders in 2019-20.

The Spanish champions will still believe they can cause another surprise in the second leg in Madrid on Wednesday, 13 April.

City have no margin for error over the next two weeks as the Premier League leaders host Liverpool, just a point behind them in the title race, on Sunday.

They head to Madrid next week before facing Liverpool again in the FA Cup semi-finals at Wembley three days later.

Guardiola has often been criticised for his curious team selections in previous Champions League knockout stages defeats with City.

That charge elicited a scathing response from Guardiola on Monday when he joked he always “over-thinks” his “stupid” tactics.

However, Guardiola’s game-changing decision to introduce Foden should silence a few of his critics after it turned a difficult evening into a vital victory.

Deployed in a low block designed to subdue City, Atletico were content to sit back with five defenders and three midfielders aligned across their own penalty area for long periods.

As ever, City monopolised possession, yet they often found themselves shuffling passes across midfield before Atletico shut the door on them.

Simeone’s famously pragmatic game-plans are anathema to lovers of attacking football, with his cautious tactics presenting a stark contrast to the purist principles espoused by Guardiola.

But, as the rain poured down, Guardiola’s frustration was mounting, as was his sense of deja vu.

When Simeone’s Atletico eliminated Guardiola’s Bayern Munich in the 2016 semi-finals, they averaged just 27 percent of the possession over the two legs.

City attempted 397 passes compared to Atletico’s 149 in the first half, but they needed to play with more invention and urgency.

Gradually, Manchester City rose to the challenge and Ilkay Gundogan went close with a curling shot that deflected wide off Stefan Savic soon after the interval.

Sterling was denied a possible penalty after Reinildo’s shoulder barge sent the City forward tumbling as he tried to reach De Bruyne’s pass.

When Aymeric Laporte headed wastefully over from Riyad Mahrez’s corner, Guardiola had seen enough and he sent on Foden, Jack Grealish and Gabriel Jesus.

Foden’s arrival was an inspired move as the England forward played a key role when City at last broke through in the 70th minute.

Taking possession outside the Atletico area, Foden shimmied away from two defenders and slipped a precise pass to De Bruyne, who timed his run perfectly to drill a low strike into the far corner from a tight angle.

Angel Correa escaped with a booking after kicking the ball at Grealish, earning a shove from Guardiola in the process.

De Bruyne had a chance to double City’s lead but couldn’t hit the target to leave the tie in the balance.