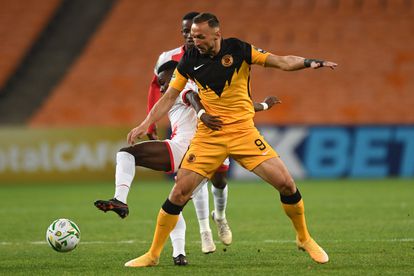 We bring you a comprehensive wrap of the latest transfer rumours floating around in South African football news circles and confirmed PSL deals and other gossip from the likes of Kaizer Chiefs, Orlando Pirates, Mamelodi Sundowns and all your favourite teams.

The rumour mill is working overtime with the start of the 2021/22 season now less than a week away.

Swallows chairman David Mogashoa has dropped a huge hint yet that he is about to sign another Kaizer Chiefs player in Given Thibedi.

Mogashoa tweeted out a picture of himself alonsgide the promising Kaizer Chiefs midfielder.

It seems that Stuart Baxter is happy to let the promising young player go, after two seasons on loan with their Soweto rivals.

Mamelodi Sundowns reportedly are working overtime to register newly-acquired striker Pavol Safranko in time for the MTN8 clash against Kaizer Chiefs this weekend.

Safranko recently joined Sundowns on a lucrative deal whic is set to make him become the first Slovakian player to feature in the PSL.

“Everything was submitted, including the police clearance,” Mamelodi Sundowns club officials told KickOff.com.

“The work permit should be ready by this weekend.

“He has settled in well in the country and is looking forward to begin playing for Mamelodi Sundowns.”

Gozar will be with the GladAfrica Championship side until the end of the 2021/22 season, with his signing coming in the wake of the exits of strikers Themba Ndlovu, Rodney Ramagalela and Tumelo Khutlang following the club’s relegation last term.

Leopards will kick off their NFD campaign with a Limpopo derby against Polokwane City on Saturday 21 August at Thohoyandou Stadium.

Kaizer Chiefs striker Samir Nurkovic has once again been linked with a possible exit from Naturena with his reported asking price now tumbling.

Egyptian giants Pyramids are reportedly the frontrunners for Nurkovic’s services while Pitso Mosimane’s Al Ahly have also been linked to the Serbian attacker.

Kaizer Chiefs are understood to be actively seeking the sale of their star striker for the best possible price, even going so far as to enlist the help of ‘a South African agent with contacts in Egypt’ to get them an offer for Nurkovic.

The club are believed to have set the asking price for the player at just over R22-million.