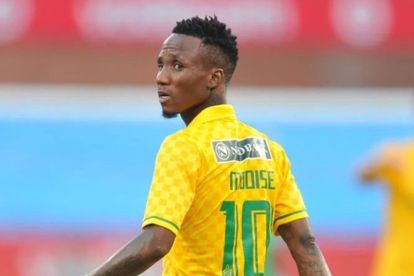 Mamelodi Sundowns legend Teko Modise has opened up on why he used to fight with his former coach Pitso Mosimane.

Mosimane is arguably the best coach in Africa at the moment taking into account his achievements in recent years.

Well-known as ‘Jingles’, the former Al Ahly coach has made himself a lot of admirers on the continent. His former students like Modise can’t stop praising the man.

The two worked together at SuperSport United before their paths crossed again at Sundowns.

‘WE FOUGHT A LOT’ – MODISE ON HIS RELATIONSHIP WITH MOSIMANE

Modise used to be a problematic lad but Pitso managed to get the best out of him during their time at Matsatsantsa.

“I think there are a lot of similarities between me and him. I remember one time he told the players at SuperSport United that there was a new ‘Teko Modise fine’.

“He likes fines. My car had one of the best sound systems and we were training at Technikon Pretoria, which is now Tshwane University of Technology [TUT] and he said I was making noise for the students.

“He started being very strict with me and sometimes I would push back a bit because I didn’t understand why he was coaching me on the pitch and off the pitch.”

READ ALSO: XOLA MLAMBO EXPLAINS WHY HE WAS GLAD TO LEAVE AMAZULU

At Sundowns, ‘General’ was one of the crucial regulars under Mosimane and the understanding between them became better than at SuperSport.

In other news, the Kagiso-born coach is currently conducting “The Masterclass Series” at Royal AM as part of his project to give back to the local game. In June, Mosimane requested to part ways with Ahly after being heavily lambasted for club’s poor results. He has recently been linked with Wydad Casablanca vacant coaching role.

READ ALSO: HERE IS THE MANDATE FOR ARTHUR ZWANE AT CHIEFS!