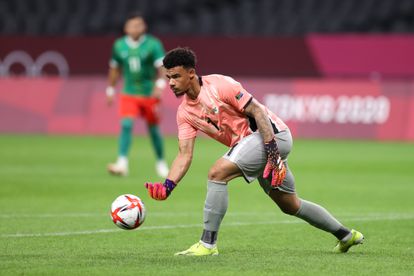 Bafana Bafana captain Ronwen Williams is said to be of considerable interest to Orlando Pirates as the season draws to an end, and the star keeper has repeatedly indicated that he does have a desire to possibly move to a PSL powerhouse club.

REVEALED: HOW MUCH CHIEFS ARE WILLING TO PAY FOR MAART

SuperSport United CEO Stan Matthews has now opened up on the subject of possibly parting ways with Williams, indicating that they will soon have discussions to decide the best way forward for the star player.

“I haven’t had my sit down with Ronwen yet, he is in camp at the moment, I did give him a commitment that we will sit down and have a chat, he has told us that he has one eye of maybe looking at a change of environment,” Matthews said Power FM, as quoted by iDiski Times.

“One couldn’t blame him, he’s been at the club since he was 12 and achieved everything he could possibly achieve, he’s won trophies, he’s the captain of Bafana Bafana with us and if his football chapter needs to be broadened or taken elsewhere it’s something he has discussed with us. It’s something we’d be supportive of him if the right move comes along.

“But there’s nothing on the table right now and we haven’t had the discussion with him. I need to catch up with him, the last week’s discussions were about losing Kaitano [Tembo] as a coach, trying desperately to maintain our top-eight spot which went to the last game.

“So that type of discussions were all put on hold as agreed with Ronwen until the end of the season. Whatever needs to happen will unfold in the next few weeks.”

“Yes, there have been talks and we will see what’s going to happen now. There has been some interest, so it will all depend on the club if they are willing to let me go,” Williams told the media recently.

In another interview, Williams has further revealed why a move to a team such as Sundowns would of course hold great appeal.

Williams may continue to put peeler feelers out

The Bafana stalwart also hinted that he would love to be challenging for the league title, and that prospect doesn’t seem likely for SuperSport at the moment.

“My ambition is to win the league. I told them I have not won the league and with the direction the club is going now, we should be realistic. We have a lot of youngsters and there is no chance that we can challenge the bigger boys.

“If this is the direction we are going, I can’t see us winning the league title. Yes, we will challenge for cups here and there.

“I have bigger ambitions than that and we will see what happens. Like I said, if I stay, I will give my all like I always do and we will see in the next few weeks what will happen.”