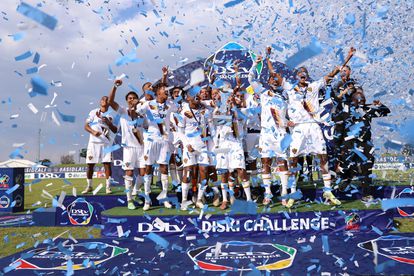 The 2021-22 DStv Diski Challenge season was concluded on Saturday as all the 16 teams played their 30th league matches.

Stellenbosch FC were on the day crowned champions after finishing top of the log with 64 points from 30 games following their 2-1 win over TS Galaxy.

This is the first time that Stellenbosch are crowned Diski Challenge champions, and the success came in their second season in the competition.

Stellenbosch beat SuperSport United to the title – Matsatsantsa finished second on the log with 62 points from the same number of games.

Orlando Pirates, who were once in the running for the championship title, finished the campaign in third position with 60 points.

Kaizer Chiefs and Mamelodi Sundowns finished sixth and seventh with 46 and 43 points respectively after what was a tough season for them.

STELLENBOSCH FC WERE SIMPLY THE BEST TEAM IN DISKI CHALLENGE

Stellenbosch are undoubtedly deserved winners after the superb campaign they had in the Diski Challenge in the 30 games.

The Western Cape outfit recorded 20 wins, the most victories by any team in the Diski Challenge this season – SuperSport and Pirates won 19 matches each.

Furthermore, Stellenbosch outscored all the teams as they found the back of net on 65 separate occasions, only Chiefs came close with 60 goals scored.