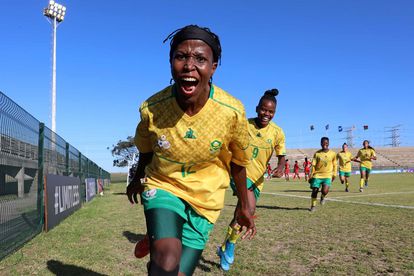 Banyana Banyana are a step away from back-to-back titles as they contest the Cosafa Women’s Championship final against neighbours Botswana on Saturday at 15:00 (SAST).

The defending champions have been the form side in the tournament, only conceding their first goal in the semifinals against Malawi.

In total, they have banged in 20 goals, with the 7-0 drubbing of Malawi their biggest win in the tournament.

A 6-2 victory saw Banyana through to the final, where they will meet Botswana, who edged 2019 finalists Zambia in the first semi.

South Africa thank you for supporting us from home. Our title defense continues on Saturday 14 November against Botswana ?? in the final at Nelson Mandela Bay Stadium.

For Botswana, slim victory margins have been more than enough in the lead up to the final.

The Zebras defeated Tanzania and Zimbabwe 1-0 in the lead-up to the knock-out stages before their 2-1 triumph over Zambia.

Their biggest win was in their opener, where the trounced Lesotho 8-0.

Despite not fielding their first team, Banyana have no shortage of players who can cause problems for the opposition.

The competition’s leading goal-scorer Sibulele Holweni proved how dangerous she can be in front of goal by netting five times against the Comoros.

Other potentially dangerous players include Hilda Magaia, as well as Mapula Kgoale. Both players have entered their names into the scoreboard on more than one occasion during the championship.

The match will kick off at 15:00 and will be televised on SABC 1 as well as Supersport.