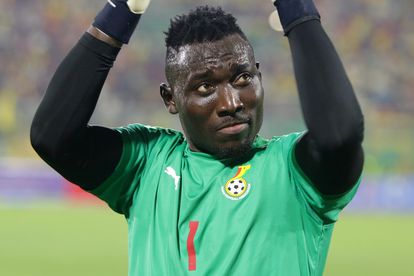 Ghana goalkeeper Richard Ofori warms up during the Qatar 2022 FIFA World Cup qualifier between Ghana and Nigeria held at the Baba Yara Stadium in Kumasi, Ghana on 25 March 2022 ©BackpagePix

Ghana goalkeeper Richard Ofori warms up during the Qatar 2022 FIFA World Cup qualifier between Ghana and Nigeria held at the Baba Yara Stadium in Kumasi, Ghana on 25 March 2022 ©BackpagePix

Orlando Pirates goalkeeper Richard Ofori will NOT be going to Qatar after being excluded in Ghana‘s squad for the 2022 FIFA World Cup.

Ofori was initially included in the 55-man provisional squad by coach Otto Addo but he injured himself during the MTN8 final against AmaZulu.

The Ghana international missed a number of training sessions leading up to the Carling Black Label Cup tournament which took place this past Saturday.

And he was withdrawn from the Pirates starting line-up on the 11th hour, and that raised eyebrows as to whether or not he would be able to recover for the World Cup.

It has now been confirmed that Ofori will not be able to recover on time for the global event which gets underway on 20 November.

With Ofori ruled out of the World Cup, this means the PSL will NOT have any representatives in terms of players in Qatar.

The 29-year-old would have emulated former Kaizer Chiefs goalkeeper Daniel Akpeyi who was the only PSL-based player at the 2018 FIFA World Cup in Russia.

While there is no PSL-based players at the Qatar World Cup games, the country will still be represented as referee Victor Gomes and assistant referee Zakhele Siwela will be officiating there.