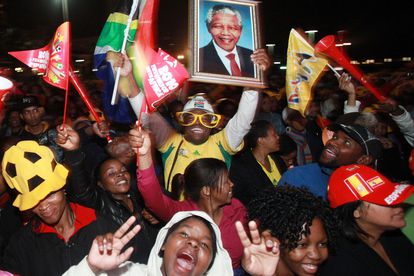 What a vibe! Fans hold a Nelson Mandela portrait before the World Cup final. Photo by RAJESH JANTILAL / AFP)

What a vibe! Fans hold a Nelson Mandela portrait before the World Cup final. Photo by RAJESH JANTILAL / AFP)

For the first time in history, all five African nations at a FIFA World Cup will be playing under the tutelage of African coaches. Aliou Cissé, the Senegal boss, is the only one of these men who has managed at a World Cup before.

Meet the coaches in charge of African nations

Talk about patriotism and national pride! Ghana is managed by a German-born Ghanaian, Senegal by a Senegalese legend from his playing days, and the same can be said for Cameroon. Walid Regragui is a fan favourite in Morocco while Jalel Kadri has vast management experience in his native Tunisia.

Africa’s teams have a massive point to prove in Qatar, too. In 2018, for the first time since 1982, no side from the continent reached the knock-out stages at a World Cup. Hopefully that should change this year.

Keep up on some daily World Cup trivia via football stats nerd foodball_za.