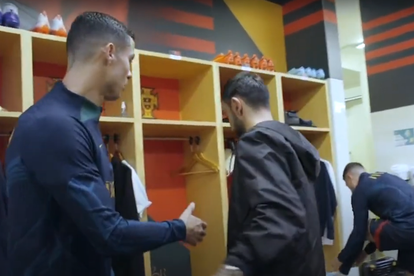 Christiano Ronaldo endured a frosty reunion with Man United teammate Bruno Fernandes in the wake of his explosive interview that has rocked the club.

In a scathing attack on the club and its first team manager Erik ten Hag, Ronaldo reeled off a series of shocking revelations in various edited video clips from his 90-minute interview, which is scheduled to be aired in full on Wednesday.

Reports indicated Ten Hag and his players are furious with the manner and timing in which Ronaldo aired his grievances.

And judging by the frosty greeting exchange between Fernandes and Ronaldo in the Portugal dressing room, there is some truth to those reports.

While Ronaldo will not have to face many of his Man United teammates over the course of the next month as club football pauses for the World Cup, the 37-year-old has already been reunited with Fernandes in the Portugal camp and the first meeting between the Man United pair was awkward to say the least.

Raw camera footage shows Fernandes walking past Ronaldo, who in turn attempts to shake hands with his compatriot. Fernandes momentarily ignores the outstretched hand, but after a moment’s hesitation, he briefly interacts with Ronaldo before speedily moving on, leaving the latter with a forlorn look on his face.

FERNANDES FREEZES RONALDO OUT IN TRAINING

Fernandes is also seen completely ignoring Ronaldo during a Portugal training session. Ronaldo jokes around with teammate Joao Cancelo, while Fernandes standing mere metres away from them barely acknowledges his presence.

Portugal are preparing for its World Cup campaign in Qatar, where they will compete in Group H alongside Ghana, Uruguay and South Korea.

The tournament kicks off on Sunday, 20 November.