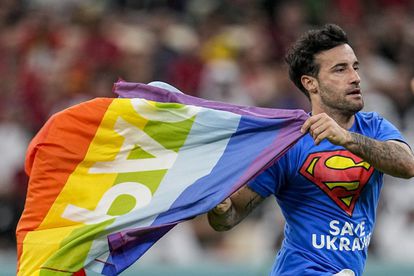 Mario Ferri runs on the field with the LGBTQ flag. Image: AFP.

Mario Ferri runs on the field with the LGBTQ flag. Image: AFP.

The protestor carrying a rainbow flag and wearing a Superman t-shirt adorned with politically motivated messages has been released and will face no further legal action at the World Cup in Qatar.

A 35-year-old Italian, Mario Ferri, was arrested on Monday night after he streaked onto the field during the Group H World Cup match between Portugal and Uruguay in Qatar.

Ferri, a self-proclaimed human rights activist, climbed onto the roof of the Portugal bench to jump onto the pitch. He ran onto the field swinging and waving rainbow LGBTQ flag while wearing a Superman t-shirt with the slogans “Save Ukraine” on the front and “Respect for Iranian Woman” on the back.

Ferri ran a large length of the pitch before he was tackled by security. He was then arrested and detained by Qatari police.

On Wednesday, Ferri confirmed his was released from detention at 3am and that he will not face any further legal action from the Qatar government.

Speaking to a European-based radio station, Ferri said that the Fifa president, Gianni Infantino, came to his rescue.

He added that Infantino had asked him why he did what he did at the Qatar World Cup as it was “very dangerous”.

“The president of Fifa, Gianni Infantino, came personally to help me.”

“Fifa does not consider my symbols to be violent. It was a message of peace, but the police are human and they treated me very well.”

Following his release, Ferri posted a message on his instagram, saying:

“I’m back. So many emotions in this moment. No legal consequences, I am free. Here is a message to thank you.”

A spokesperson for the Qatar Supreme Commitee (SC) said Ferri had his Hayya visa card to enter country cancelled and he was banned from attending future matches at this year’s tournament.

The Italian is due to leave Qatar on Thursday.