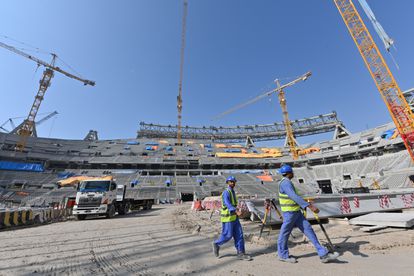 This file photo taken on December 20, 2019, shows construction workers at Qatar’s Lusail Stadium, around 20 kilometres north of the capital Doha. – Qatar has rejected calls for a compensation fund for migrant workers killed or injured during World Cup preparations, with the country’s labour minister calling it a “publicity stunt”. Photo: GIUSEPPE CACACE / AFP.

This file photo taken on December 20, 2019, shows construction workers at Qatar’s Lusail Stadium, around 20 kilometres north of the capital Doha. – Qatar has rejected calls for a compensation fund for migrant workers killed or injured during World Cup preparations, with the country’s labour minister calling it a “publicity stunt”. Photo: GIUSEPPE CACACE / AFP.

Qatar has rejected calls for a new compensation fund for migrant workers killed or injured on its mega projects for the football World Cup, with the country’s labour minister calling it a “publicity stunt”.

Qatar already has a fund to deal with worker deaths and injuries, and Marri said groups criticising his country should help “strengthen” it.

“This call for a duplicative FIFA-led compensation campaign is a publicity stunt,” he said in an interview. “Our door is open. We have dealt with and resolved a lot of cases.”

Amnesty International and Human Rights Watch have led demands this year for FIFA and Qatar to create a fund for workers matching the $440 million World Cup prize money.

The groups accuse Qatar of under-reporting deaths on construction sites and from heat-related illnesses in the country’s searing summer temperatures.

FIFA has said there is “ongoing dialogue” about the fund, but in the government’s first public comment, Marri said the proposal was unworkable.

“Every death is a tragedy,” Marri said, adding: “There is no criteria to establish these funds.

Some international trade union leaders have also said a new fund would be too complicated to set up and manage.

“The vast majority of migrant workers who have now returned home to countries like Nepal or Bangladesh are unable to access Qatar’s current scheme,”

“Qatar must expand its existing compensation funds or establish a new one –- no one is saying it is easy, but if the will is there, a solution could be found.”

“If there is a person entitled to compensation who has not received it, they should come forward and we will help them,”

he said, adding that Qatar was ready to look at cases from more than a decade ago.

Qatar has faced a barrage of criticism since it was named a World Cup host in 2010. Attacks have increased this year over migrant workers, LGBTQ freedoms and women’s rights.

Last month, Qatar’s emir said the country was facing an “unprecedented campaign” of criticism ahead of the November 20 kick-off.

Marri said detractors had ignored reforms implemented since 2017 with the help of the UN’s International Labour Organization and unions.

Critics have used “false information” and “rumours” to “discredit Qatar with deliberately misleading claims”, he said.

Marri added that some foreign politicians deployed “double standards” and used Qatar “as an arena to solve their own political problems”.

The minister did not give an example, but Qatar last week summoned the German ambassador over comments made by the country’s interior minister.

“They don’t want to allow a small country, an Arab country, an Islamic country, to organise the World Cup.

“They know very well about the reforms that have been made, but they don’t acknowledge it because they have racist motivations.”

The ‘Kafala’ employment system that opponents said was near slavery has been virtually dismantled in Qatar. Workers can now change jobs and leave the country without their employer’s permission.

The government has established a minimum wage of 1 000 riyals ($275) a month, and passed laws against trafficking and limiting the hours that can be worked in extreme heat.

Marri said 420 000 workers have switched jobs since the laws were passed, and a fund created in 2018 had paid out $320 million this year alone to workers who had lost or had wages stolen by companies.

“After all this effort, all these reforms, people still attack us,”

The ILO this week said unpaid wages were workers’ biggest complaint, and that Qatar’s main challenge is to apply its new laws. Marri said his ministry was “focused” on the task.

“If a salary payment is delayed for one month, we will pay from the fund and take action,” he said, adding that owners of blacklisted companies had been fined and jailed.

Forty-two recruiting agencies accused of exploitation have been closed, tribunals hearing complaints have increased from three to five, and extra labour inspections have been ordered on hotels and other industries during the World Cup.

Marri said the World Cup has only “speeded up” Qatar’s reforms. “We will reconfirm our commitments and continue our reforms because we want to continually improve our own country.”